« Are you counting on the Noles in Boise, or counting them out? | Main | Forget the AIG mess, the real question is how did Florida State get bit by the Badgers? »

Noles lay a big chalupa at the Taco Bell Arena 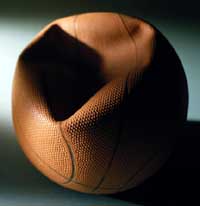 In the end, it was luck. You know that last second, cliffhanger, Hail Mary good fortune that blessed the Noles all season long? Poof.

A smiling Lady Luck who almost always appeared just in the nick of time, suddenly revealed her dark side, breaking Garnet hearts and killing Golden dreams of a run deep into the finals.

Was Wisconsin that good? Were the Noles over-confident? Did they foolishly count on Toney to be the hero one more time? Or was Leonard's half time speech too much X's and O's and not enough Gene Hackman?

Hamilton and his promising roster of returing talent have nine months to ponder all that. But there's one thing this team does know. They can't put their blind faith in Toney Douglas next season -- or Lady Luck.