Forget the AIG mess, the real question is how did Florida State get bit by the Badgers? 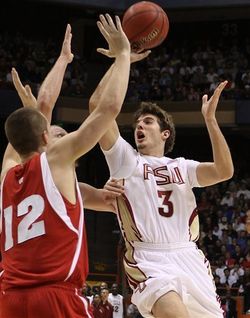 FSU fans are still scratching their heads over the Noles first-round loss to Wisconsin. ChantRant reader "Nole More Nice Guy" questioned whether Hamilton should have stayed with three guards in the second half as he did in the first. Bill from Tampa answers with a slightly different take.

Once again Leonard went to his usual tactics at the end of a game and for some unknown reasons he takes out Solomon in a situation he could have helped us -- aka his defense -- and after having a nice few minutes in the first half never used Xavier again. I don't get that at all. Toney was gassed and he didn't have that big man option around the basket. In other words Leonard adjusted our team to what Wisconsin was doing. That often fails when you have the height advantage and then go small. You play right into their hands. Think Dallas Mavericks two years ago when Avery Johnson did the same thing and promptly became the first #1 seed in NBA history to lose to an 8 seed. You go with your strengths. Leonard took some of that away by benching Solomon.