« FSU and the ACC's pest control problem: who'll stop the killer bees? | Main | Tonight, get a sneak preview of FSU's next (we can only hope) Toney Douglas »

Did Miami's offense get an extreme spring makeover? We ask our go-to Cane 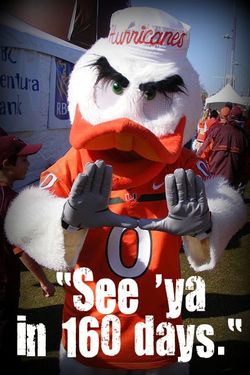 If the spring game is any indicator, Miami's new O-Coordinator Mark Whipple whipped the Canes' offense into shape faster than you can say "Fire Pat Nix." That prompted some questions for Kartik, the Cane blogger who doesn't see the world through orange and green glasses. Here's the first Q & A.

What did you see in the Canes offense that makes your new O.C. an upgrade over the last one?

More of a power running game. Damien Berry and Mike James both had a good spring game, after a few really good weeks of practice.  I think Nix had the offense on the right track and a lot of Miami fans either don't recall how Miami won a few of their titles (with passable offenses coupled with great defenses and kick/punt returners who were game changers) and how Nix had his unit closer to being a typical Miami unit than did the defensive and special teams coaches. The ultimate problem with Nix was that his offenses lacked an identity. From game to game the Canes would change their gameplan, offensive look, starting WRs, and often the featured RB. The lack of consistency not just in production but in looks killed Nix. Whipple on the other hand is used to the grind of the NFL and evidently believes that consistency in looks and play calling is a must. As a result Miami may actually become more predictable. Nix was anything but predictable, which hastened his downfall.