Are you counting on the Noles in Boise,
or counting them out? 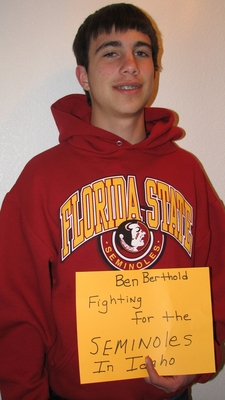 So on the eve of Florida State’s first appearance in the NCAA in eleven years Seminole fans are ramped up in anticipation of the ‘Noles hopefully making a good showing by winning a couple of games or maybe more. I know I am.

But a recent comment by a FSU fan kind of struck me kind of odd.

The comment was basically that Florida State has no experience in the Big Dance. It was also expressed that Toney Douglas may be a senior leader but he hasn’t been there either so he can’t be much help to the freshmen on the team on what to expect in Boise. Meanwhile I’m reminded that Wisconsin has been to the tournament eleven straight years (like those guys from eleven years are going to help them now?) and they have that experience.

Here’s why that strikes me funny.

In the league gathering before the season, the ACC media picked Florida State to finish 10th in the conference. That didn’t happen as the ‘Noles finished 4th.

As the season rolled on, FSU was making some noise and yet the pollsters ignored them to the point that the Seminoles were not even receiving but a couple of votes. And even when FSU finally could no longer be ignored and many voters ranked the team, even then they ranked the ‘Noles too low behind a Clemson team they beat twice, or some didn’t rank the Seminoles at all. Notice they are in the latest poll at #16 now. Took them long enough to stop discounting the Tribe.

And then there was the ACC tournament, coming in as a four seed. Most figured one win but probably a loss to North Carolina. Some FSU fans even sold their tickets to the semi-final game to Tar Heel fans.

Funny how that didn’t happen either and the ‘Noles ended up playing Duke for the tournament championship, a place they had never ever remotely been that close to before and with those same freshmen on the squad. And, oh yes, Toney who hadn’t been on a FSU squad that won more than one ACC tournament game.

Even long before the season began, most felt it would be a rebuilding year and reaching the NCAA would be just about impossible.

That would be the conventional thinking, with so many new players to initiate into college ball that the ‘Noles might be in a bit of a rebuilding mode.

And yet Toney Douglas and company managed to compile a 25-9 record, win the second most league games (10) in school history, earn a bye into the tournament, win game one, win the semifinal, play for the ACC title, and convincingly prove they belonged in the NCAA tourney.

Yes, it is true that FSU lack players on this current roster with any NCAA experience. Heck, half of them don’t even have NIT experience. However those freshmen led by Toney have been proving the doubters wrong every single time all season long.

So go ahead and doubt them again. They just might prove you wrong again.