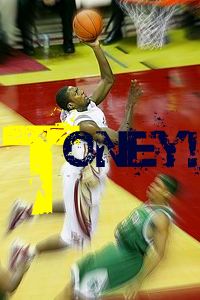 Our friend Kartik from Canes Rising is more than just a college basketball fan. He's a connoisseur of talented teams and players, no matter what color uni they wear. And today he joins us to salute a Seminole who will be sorely missed.

Florida State finished in last place in the ACC while Von Wafer sulked through the 2004-05 season. Leonard Hamilton’s third season in the ACC with FSU resembled his horrible third season in the Big East at Miami, where the Canes went from seven league wins the previous season to zero in 1993-94, setting a Big East record for futility. which mathematically can never be broken.

By Miami’s seventh season in the Big East, the Canes had made the NCAAs and were beginning a run of five seasons unlike any the school had ever experienced before (or sadly from my perspective, since.) Florida State was left in lamentable shape by Steve Robinson. A decent bench coach who couldn’t recruit to the standards of the ACC, The Seminole Basketball program was considered among the biggest failures in a power conference in the early part of this decade.

Hamilton was successful in initially recruiting some good players. Wafer, JUCO transfer Tim Pickett and Al Thornton were among the best. But FSU didn’t really get going until Toney Douglas showed up in Tallahassee. His arrival at FSU was similar to the arrival of Kevin Norris at Miami in 1994, a point guard whose arrival on campus helped Hamilton win National Coach of the Year in 1995, while authoring the biggest one year turnaround in Big East history.

Douglas started his career at Auburn. Recruited by Cliff Ellis, he ended up playing for Jeff Lebo. Despite a very good Freshman season, the new system wasn’t to his liking.

His transfer to Florida State caught many by surprise. But almost immediately he made an impact on the program. His work ethic and basketball IQ rubbed off on the team, even while sitting out the season thanks to incredible practice sessions. Douglas was credited by the Coaching Staff for helping to fuel the turnaround, though he sat out the season. FSU was snubbed by the NCAA Tournament Selection Committee, becoming the first team in recent memory to go 9-7 in the ACC and miss the dance. (Sadly, two years later an equally deserving Virginia Tech would be snubbed again at 9-7, while the  less competitive SEC received more NCAA bids that season than the ACC.)

But FSU ended the 06-07 and 07-08 seasons in the NIT. Graduations of key players left Douglas as the one real leader and veteran on the team. Douglas had been spectacular at times in the previous two seasons but also turnover prone, and had a tendency to disappear when FSU most needed him.

This season, Douglas's defense was, as always, spectacular. His offense improved but most importantly he provided critical leadership to a young team. During the wars of ACC Conference Basketball, Douglas could often be seen encouraging youngsters Derwin Kitchen, Chris Singleton, and Luke Loucks, among others, when the Noles left the floor for a TV timeout or going into the half.

The team responded by taking on Douglas’ personality. The Noles showed more flair than the previous few seasons, and far better perimeter defense against top ACC teams than before. Much like Kevin Norris, Leonard Hamilton’s Senior leader who had only tasted NIT’s before the 1997-98 season at Miami, Douglas willed a young team to the NCAA Tournament.

If FSU needed a big shot made, Douglas took it. f they needed a defensive stop, he played a big role in it. Florida State has had a lot of great players since the Noles last really good team in the 93-93 season. Ron Hale, Corey Louis, Tim Pickett, Al Thornton, Alexander Johnson and Kerry Thompson all come to mind. Some of these guys have played in the NBA. I don’t profess to know what the NBA wants in combo guards or whether Douglas will ever play a game in the league.

What I do know is years from now, Florida State fans and watchers of the ACC will look back on Toney Douglas as an influential player who changed a culture of mediocrity and losing at Florida State into a “can do attitude.” He’ll be the guy credited with turning the Seminoles from a potential sleeper to an ACC upper division threat.

That makes him a Seminole great.