« On Sept. 12, the Noles will attempt to even their record against Jacksonville State | Main | Was the Wake game a speed bump or a brick wall for the upwardly mobile Noles? » 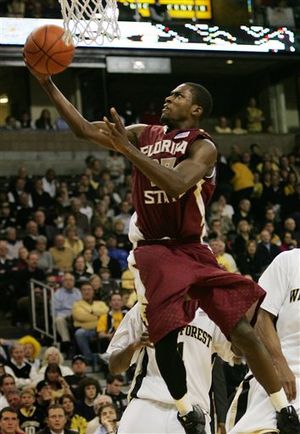 It’s a pretty good guess that at the basketball banquet in April those in attendance will not be seeing clips of Saturday’s game with Wake Forest in the DVD of the season’s highlights.

Leonard Hamilton has been known to watch a game recording shortly after the game is over four and five times. It’s quite possible he didn’t watch it even once.

After being pummeled 86-63 and trailing by as much as thirty points, probably most Florida State fans wished they had not watched it once either.

Playing their worst game of the season, the Seminoles never got on track, never led once, and were tied just once in the game at 10-10.

“I guess we kind of ran into a buzzsaw,” Hamilton said.

That was readily apparent as FSU found themselves down 8-0 within minutes after the game started against the far more aggressive Deacons. The ‘Noles did not score on their first seven possessions committing three turnovers, all by Solomon Alabi, to open the game. By the time 7:03 had elapsed the Seminoles had racked up seven miscues.

After the seventh turnover FSU seemed to settle down with Uche Echefu scoring six straight points to tie the game at 10.

Echefu’s contributions were short-lived as moments later he found a seat on the bench with his second foul.

Where it all seemed to unravel is when the ‘Noles were trying to cut the margin to five. Ryan Reid attempted a bounce pass to Alabi that was picked off. Jeff Teague promptly laid the ball in at the other end to give Wake a 29-20 lead.

That lead, helped by numerous trips to the free throw line, grew to sixteen with just over a minute left in the half.

FSU managed to cut it to twelve at 42-30 at intermission.

The Seminoles even closed the gap to 42-35 in the early minutes of the second half. But the Deacons went on a 13-3 run, scoring on four straight possessions.

The key moment that seemed to end any hope for FSU was when Chase McFarland and Alabi got tangled up with each other as they headed up the floor. Alabi swung his arm hitting McFarland in the face with his elbow. McFarland went crashing to the floor, and after the refs stopped play ruled that Alabi committed a flagrant foul and ejected the Seminole’s center.

Now trailing 59-38, without their starting big man, and with others in foul trouble, the ‘Noles were unable to mount any kind of charge, eventually falling behind by the score of 83-53, losing for the seventh time in the last eight trips to Winston Salem.

Toney Douglas had another excellent game even if his teammates didn’t scoring 22 points with 5 rebounds, 3 assists and 2 steals.

The Seminoles will take on Miami in Tallahassee on Wednesday. Tip off is at 7:00 PM.