« Update: Greg Reid eliminates Florida (thanks for screwing it up, Urban) | Main | Former Nole Marcus Ball may be back at Doak as a Tiger or Gator » 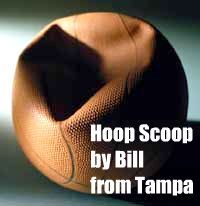 Leonard Hamilton called it a winnable game and it almost was. Unfortunately the Seminoles could not stop the senior guard combo of Miami, falling to the Hurricanes 75-69.

Despite Miami doing its best to keep the ‘Noles in the game at the end, FSU could not capitalize on the opportunities.

Toney Douglas hit three of four free throws to bring FSU to within three points, 70-67, with 1:20 left to play. But a defensive breakdown left Hurdle all alone to receive a baseball pass down the floor for the easy layup.

Still, Miami left the door open when Dwayne Collins missed two charity shots seconds later. But Douglas missed his next two free throw attempts that would have made it a one possession game with just under a minute left.

And still Miami gave FSU a chance by turning the ball over on the ensuing possession only to see Derwin Kitchen pickup a charging call.

By the time Douglas’ layup did make a it a one possession game at 72-69, there was not enough time left and Miami closed out the Seminoles with three of four from the stripe.

Douglas scored a game high 30 points that included 7 of 14 from the arc. But he got little help offensively. As Hamilton noted after the game, “there were a lot of 2 for 9’s and 3 of 8’s on the boxscore.”

Solomon Alabi was the only other Seminole in double figures with 10 points six of which were scored in the first five plus minutes of the game.

After that, getting the ball inside was an issue for the ‘Noles.

The head coach lamented the lack of post production saying “We had game planned to have twenty post touches in this game. But I feel we came up a little short in that area.”

Another area the Seminoles came up short was defensively, notably in the second half. The Seminoles allowed Miami to shoot 62% in the final period (49% overall) in particular, allowing 6 of 9 three pointers to the second best three point shooting team in the conference.

“We allowed them to get in an offensive rhythm” Hamilton said. "The second half our defense had a letdown allowing them to shoot 62%. And therein lies the game.”

After FSU ran out to a 16-4 early lead on a Chris Singleton slam dunk, things began to slip away for the Seminoles. Douglas canned a three ball to make it 29-21 with 4:11 left in the half. It would be the last points would score in the period.

Meanwhile Miami out-fought the ‘Noles and went on a 9-0 run to take a 30-29 halftime lead.

The zone defense had a little something to do with the Seminole offensive slump as the Tribe struggled to find good shots against the Hurricane zone.

Hamilton credited the changing up and disguising of the defenses Miami did that kept his team’s offense off balance adding “We are a better shooting team than that.”

But in the end Hamilton felt the zone was not the issue. “We just didn’t do well on defense.”

FSU did take a brief lead in the second half, 51-50, after an Uche Echefu basket with ten minutes remaining. But Hurdle scored seven points in 1:32 with his three ball giving Miami the lead for good at 53-51.

Although FSU stayed close pulling to within one twice, every run at the Hurricanes was answered.

On a night that saw Florida lose and Northwestern beat seventh ranked Michigan State, FSU had a chance to improve its argument that it should be ranked, assuming they would beat Virginia on Saturday at 4:00 PM. But that opportunity is probably lost for the moment.

“Any time you let one slip away it hurts,” said Hamilton. “We just didn’t respond.”