« FSU in the running for one of 2010's top DL | Main | Update: Greg Reid eliminates Florida (thanks for screwing it up, Urban) » 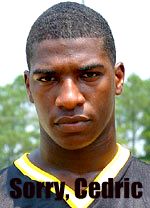 At the beginning of the week we heard FSU was among three finalists for Cedric Wilson, a Safety/LB out of Chattahoochee County High near Columbus, GA. Intrigued by a guy who didn't seem to be on the Noles shopping list, we did some digging.

The update: Cedric won't be a Nole.

"FSU decided not to offer him," said Wilson's coach, Josh Kemp. "He got the news this week. Cedric was disappointed because his heart was set on FSU. He'd cancelled some visits he probably should have taken."

Asked why no offer, Kemp said it was "probably a numbers thing." Cedric is now leaning towards Troy.

Wilson was recruited by, and got the bad news from, FSU's DE Coach, Jody Allen.

Character not a problem. The publisher of the county's weekly newspaper, Richard Harris, said Wilson is an excellent player and a good student. "You just know he's going to do something, whether he plays football or not."

Good news or bad? If Cedric was a contingency, Plan B prospect, could it mean that some higher rated player made a silent commitment? Or are the Noles downsizing the '09 recruiting class because they know NCAA penalties will cut deeper than expected?