« You don't have to wait til Signing Day to hear where Greg Reid will sign | Main | One squeezed the Charmin, the other will put the squeeze on FSU's defense » 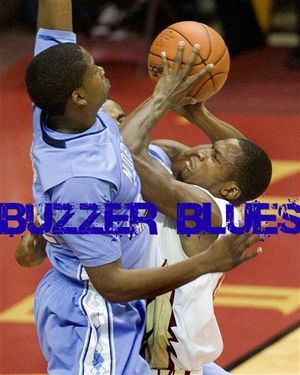 It was a golden opportunity lost in an instant.

What could have been the signature win of the season so far for Florida State slipped away at the buzzer. Ty Lawson got by Derwin Kitchen at the time line then pulled up just above the key and nailed the game winning three pointer to give 5th ranked North Carolina an 80-77 win over the Seminoles.

FSU seemingly had control of the game holding a 77-74 lead with ninety seconds left. But following a timeout by the ‘Noles Kitchen lost the ball to Danny Green. Taking the ball the distance, Kitchen fouled Green for the three point play tying the game at 77.

But the Seminoles had two more chances at the upset. Toney Douglas’s missed three was rebounded by Chris Singleton with nearly half a minute left. Leonard Hamilton let 14 seconds run off the clock before calling his last timeout to set up the final FSU possession. But Douglas’ shot was partially blocked causing a shot clock violation despite apparently being bumped by Tyler Hansbrough.

Hamilton said afterwards “I thought we deserved to win this game. We just came up a little short”

But he also gave credit to North Carolina in making the key defensive play at the end and Lawson’s Hail Mary shot. “That’s what great teams do, make great plays. “

FSU jumped out to an early 7-0 lead and after being tied at nine opened up a 26-17 lead at the 8:04 mark Things even seemed to be going the ‘Noles way when Hansbrough found a seat on the bench after picking up his third foul less than two minutes later and with just two points in the game to that point.

But the Tar Heels dug their way back and you had an uneasy feeling even though FSU was shooting 52% to UNC’s 35% from the floor but were only up by two points.

After Douglas stole the ball from Larry Drew and took it coast to coast for the lay in FSU led 32-28.

On those last minutes Hamilton commented “People will look at the end of the game, but it was those last seven or so minutes of the first half where we came up short. We had too many bad possessions on offense and defense.”

However, on the strength of Douglas’ 24 second half points (32 overall), FSU made a run at the Tar Heels. Following Singleton’s three ball from the left corner, a layup by Luke Loucks gave the Seminoles a 64-63 lead with 8:27 to play.

Douglas carried the team again outscoring the Tar Heels 6-1 by himself to give FSU a 77-74 margin.

A three point attempt by Lawson missed its mark and was rebounded by Singleton setting up the final 1:30.

Despite the disappointment, Hamilton said he was proud of how his team “did not back off”.

The Seminoles did enough things right in the game that could have given them the victory. The offense shot 47% for the game while holding UNC to just 38% and more importantly Hansbrough to just eight points.

And although the ‘Noles gave away the ball 19 times, they forced UNC into 21 turnovers on 12 steals.

But with North Carolina’s big man struggling, the Tar Heels had enough other weapons to more than offset Hansbrough.

Uche Echefu joined Douglas in double figures with 14 points as well as 8 rebounds.

With the loss, FSU’s record falls to 16-5, 3-3 and have eight days to regroup from the loss. FSU will host Georgia Tech next Thursday with tip off at 7:00 PM.