« One squeezed the Charmin, the other will put the squeeze on FSU's defense | Main | Another day, another jersey number promised to a Nole prospect by Mark Richt » 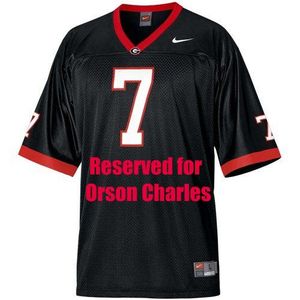 Every year college coaches find new ways to gain an edge in persuading blue chip players to commit. And every year the NCAA's recruiting rulebook gets a little thicker.

Give Georgia's Mark Richt credit for dreaming up a new one. A creative tactic that most schools can't match and the NCAA probably won't touch.

Richt has promised WR Orson Charles the number 7 -- the one he wore in high school  -- if he signs with UGA. "It was really neat that he said he would hold my No. 7 jersey for me," says Charles, "even if there is another player they’re recruiting that wants it and that guy is [deciding] on signing day.”

C'mon, Bobby, Jimbo -- somebody. FSU needs Charles enough to counter with a similar offer. If Christian Ponder is truly a team player, he'll be eager to switch numbers to help snag the number 7 (what a concidence) WR in the nation, according to Rivals.