FSU may have been the faster team, but it started slower than a Yugo on a cold morning 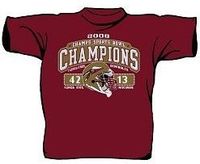 Dynasty deja vu. Not only the score, but the way FSU won against Wisconsin. Veteran Nole fans will recognize it as a signature Jekyll and Hyde game. The kind that Bowden's teams seem to play at least two or three of every season. It's been that way through the dynasty years and right up to tonight.

You knew it was one of those games by the way the offense went sleep walking through most of the first half. Then, just as Mickey looks like he's about to go Chernobyl, a big play turns momentum 180 degrees. That opens the floodgates. And suddenly the team that was tripping over its own shoelaces is pummeling the opponent like a heavyweight champ wasting an unworthy contender just out for a big payday.

Hey, but who's complaining? The thrill of seeing the Noles hitting on all cylinders is worth all that agony of "OMG, we're gonna get creamed" -- though it may not seem like it when your stomach feels like it's full of fire ants.

A Bowden record breaker. The 29-point margin of victory is Bobby's biggest in a bowl during his FSU career. And it's oddly similar to his first bowl victory, also played in Orlando, a 41 - 17 bruising of Texas Tech.

Maybe they should call it the Nole Bowl. The Citrus Bowl Stadium has been very, very good for FSU. Bowden era teams are 7 - 0 - 1 in Orlando, outscoring opponents by 305 to 119.

Badger fans PO'd about penalties. Our friend at Badgercentric, who we did Q and A's with this month, says two calls by officials turned the game into a rout. The most flagrant was Gano's Oscar-worthy performance when Wisky was flagged for roughing the kicker. He adds that "FSU was probably the fourth best team we played this year," ranking the Noles behind Penn State, Ohio State and Iowa.

Adios, Myron. We hoped that no. 3 would have a big game in his final appearance in Garnet and Gold. But kudos to Rolle for being Florida State's MVP off the field. The great press and goodwill he generated for the school and program are -- like the Mastercard commercial says -- priceless. He's earned a place in the pantheon of Nole heroes, right up there with special guys like Warrick Dunn and Derrick Brooks.