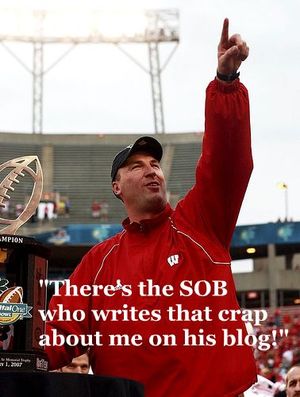 Bret Bielema is just getting settled in after being  Wisconsin's HCIW, and already some Badger fans want him out the door. Fire Bret Bielema has roasted the third year coach as often as bratwurst at a UW tailgate. You'd think he was a coach's son in over his head the way Bret gets ripped in the Fire Bret blog. A sample commentary from the site's agitated author:
"Every week, the Badger football team is a circus. Yes this team is 7-5, but the win column does not tell the story. It's all about context. You judge a coach by what happens when he has the tools to win. This Badger team entered the season built-to-win, and turned into a train wreck."