« Last week a loss to B.C. This week a win thanks to a different kind of B.C. | Main | Frigidly Random and Suggestively Meaningless Thoughts » 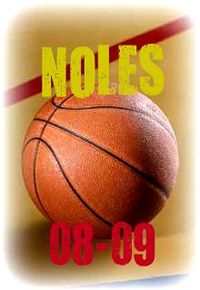 Toney Douglas scored 30 points that included six three pointers in leading Florida State to yet another come from behind victory, this time over Coastal Carolina, by the score of 82-70.

Said Leonard Hamilton on Douglas’ performance, “You almost expect that from Toney” who added 6 rebounds, 5 assists, and 4 steals to his boxscore line.

The Seminoles as they have done in the three previous games this season got behind early in the game before eventually grinding out the win. In this game, however, FSU was behind by its largest margin yet when the Chanticleers built a 25-10 lead on the strength of five three point baskets with 8:35 left in the first half.

Coastal could not miss in those first twelve minutes shooting 72% from the floor. The ‘Noles on the other hand at one point were shooting just 18%.

That fortunately did not last as FSU heated up in a big way to end up shooting 52% for the half. Behind Douglas 20 points in the first twenty minutes, Chris Singleton’s 8 points and Luke Loucks thievery (3 steals) as well as 8 points the Seminoles took a 45-42 halftime lead on a three ball by Douglas right before the buzzer sounded.

The Chanticleers managed to take the lead twice in the second half, the last at 62-60 with 6:58 remaining. But FSU began to attack the basket more drawing fouls sending them to the free throw line.

That’s usually good news for the Seminoles and held true in this game. FSU converted 10 of 12 chances at the stripe (23 of 26 overall) over the last 4:37 of the game to slowly pull away from Coastal.

Singleton ended the scoring with a slam dunk off a no look pass from Douglas.

For the game Singleton finished with 17 points. He was joined in double figures by Loucks with 14 who added 6 assists to just 1 turnover.

The Chanticleers cooled off after the hot start and were held to 41% shooting for the game thanks in part to a more intense FSU defense that finished with 15 steals..

For a game similar to Stetson on Thursday night, Coastal connected on 11 three pointers, many of which were open shots.

Hamilton addressed that issue saying, “The defense is not where we like it to be. But it’s not that bad. What the young guys have not learned yet is not contesting shots at this level means guys will knock them down.”

We still need to learn how to prepare mentally for these games” Hamilton added. “These close games allows for a teaching opportunity. Once we got down we had tremendous effort. But in the second half and we were up, not quite as much.”

Although a wider margin might have been expected against the now 0-3 Chanticleers, what made this win impressive was that Florida State had almost no practice time in preparing for this game. After arriving back from LaSalle, the team had a NCAA mandated day off and had to have a short practice on Saturday morning to prepare for the afternoon contest.

Florida State will have yet another short time to prepare for another game when they take on Western Illinois on Monday night. Tip off is at 7:30.