Seminoles blow out Western Illinois,
at least for awhile anyway 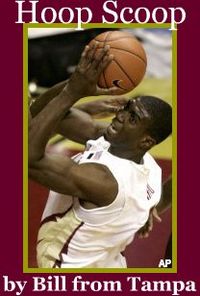 What looked to be headed towards a blow out when Florida  State led by 24 points turned into a relatively close game. But the Seminoles who never trailed held off Western  Illinois to win 67-55.

In the first half FSU had slowly begun to pull away from the Leathernecks. A steal by Jordan DeMercy and pass to Toney Douglas who laid the ball in right before the halftime buzzer gave the ‘Noles a 34-20 lead.

At the start of the second half Florida  State continued to pound the ball inside exploiting their definite height advantage against Western four guard line up. Xavier Gibson’s three point play put FSU up 46-22 with fourteen minutes to play.

At that point it appeared FSU would cruise to victory.

However, as has been the case in the previous four games, FSU experienced one of those scoring droughts. Luke Loucks’ three pointer from the left corner with less than eight minutes to play ended a 20-4 run by the Leathernecks led by Ceola Clark’s 9 points. The ‘Noles now led 53-42.

It didn’t help either that FSU lost its mental focus just as they did against Jacksonville after getting out the big lead. Shooters were now left open and ill-advised fouls committed sending Western to the line with the clock stopped thus keeping them in the game.

The closest Western would get would be eight points, 63-55. But there was only a minute left and not enough time to pull off the upset. Forced to foul, Ryan Reid and DeMercy ended the scoring by connecting on all four free throw attempts.

The Seminoles were led in scoring with 12 points apiece by Solomon Alabi and Uche Echefu. Chris Singleton added 10 points.

Toney Douglas for the first time in a long time was held to under double digits with just 7 points. The senior had fewer touches than normal though as the game plan seemed to be work the young guy’s offense and get the ball inside. Douglas played only 28 minutes.

Leonard Hamilton obviously was experimenting as he replaced all five players on the floor each time he substituted in the first half and much of the second half. Douglas, DeMercy, Singleton, Reid, and Alibi started the game, while Loucks, Echefu, Gibson, Pierre Jordan, and Devidas Dulkys comprised the second unit. That is not something that more than likely will be seen the rest of the season, especially with tougher competition upcoming.

Asked about the five for five substitution pattern, Hamilton said he felt he had to give the young players a lot of minutes. “Sometimes they deserved it and sometimes they didn’t” he said. “But we also wanted to keep players fresh.”

As Hamilton mentioned the competition will significantly increase as the Seminoles take on Cincinnati on Friday, this time in Las Vegas, a homecoming of sorts for Dulkys, in game three for the ‘Noles in the Global Sports Classic. Tip off is at 10:30 PM Eastern Time.

The Bearcats are 4-0 after having beaten Western  Illinois 74-46 and FSU’s previous opponent Coastal Carolina 82-56.