« Highlights of the game the Noles hope to duplicate on Saturday | Main | It was a little like The Choke at Doak, only in reverse »

Q & A with Pat Dooley of the Gainesville Sun, including FSU's shot to win and the chances of Tebow going pro 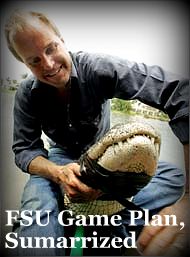 Pat Dooley, the go-to journalist for everything Gator, joins us for some straight up answers about that team down South.

Pat, the same first question as last year. How can FSU beat the Gators?
Turnovers. The only game they lost this year is when they turned the ball over against Ole Miss. If they don't, they're pretty hard to beat. So FSU will either have to create them or hope for Florida to make mistakes, which they have occasionally done, but not very often.

Besides turnovers, what did Ole Miss do to win?
What happened was two fumbles to start the second half. That killed Florida and allowed Ole Miss to have a little bit of ball control. And then they hit a big play when the safety messed up and didn't come over on two deep coverage. They also ran the ball pretty well and broke some tackles. Ole Miss is a good team.

After four wins in a row, is this still a big game for the Florida players and coaches?
Absolutely. Rivalry games never go away, no matter who wins or how many times. And for the players, because they've played against so many of these (FSU) guys, it's a huge game no matter what the records are.

During the Spurrier years, at least, when Florida came to Doak, they seemed to be looking ahead to the SEC Championship game.
There's no question with the '92 game. But I think the Choke at Doak kind of changed that. After that Spurrier probably had the same feelings toward FSU that he did for Georgia.

Will Urban be pulling some new wrinkles out of his playbook?
In fact, they'll have the full arsenal. One of the players said their scouting report is a lot thicker than it's been the last few weeks. They haven't needed many specialty plays in the last six weeks. They've been dominant just with basic plays.

Has Tebow talked about going in the NFL draft next April?
I think it's about 60 - 40 he goes. He's said he hasn't even thought about it, and I really believe it's a decision that'll be made after the season, especially if Florida's in the national championship game.

Money doesn't seem to be his motivation, though.
No, but on the plus side for going pro is the opportunity to do more of the charity work he wants to do. The NCAA restricts what players are able to do, and I think that frustrates him at times. He's trying to do good things and they're saying 'No, you can't do that.' But if you go to the NFL you can do pretty much anything you want. So that's going to be a factor, too.

But in the end I think it'll come down to what he's accomplished. If they lose to Florida State or lose to Alabama, and don't win the national title or the SEC, that will weigh into it, because he'll have not won a championship as a starter -- only as a backup.