« "Hang on everybody, here come the Noles!" | Main | Q & A with Pat Dooley of the Gainesville Sun, including FSU's shot to win and the chances of Tebow going pro »

Highlights of the game the Noles hope to duplicate on Saturday


Rewind to September 25th, the day Ole Miss shocked the Gators 31 - 30 at Benny Hill Stadium. Florida led in all important stats except one -- turnovers. The Rebels shook five fumbles loose, recovering three. They also blitzed Tebow all day, sacking him three times. Credit those sacks in part to the Ole Miss secondary that played a smothering zone and took away the deep threat.

Florida still had a chance to win with a late drive, but they stalled at the Rebs' 32 with a fourth down and about two feet to go. So with 40 seconds left and down to their last gasp, who gets the ball? That's right, and watch what happened. 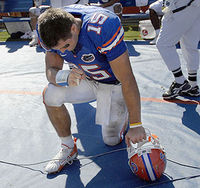 Of course Tebow was sure he'd made it. But a voice from the bottom of the pile foretold his fate, as described here. Later, the humble Gator QB (NOT) told reporters, "We're rarely stopped on fourth-and-1. That's part of our swagger."

After the game a teary-eyed Timmy choked back his emotions, and made this vow. We're eager to hear that hurt and see those red eyes again Saturday night if FSU's D can replicate what Ole Miss defenders did to burst no. 15's bubble.