While FSU's defense crams for its big test against Georgia Tech's triple option, Nole fans are also curious about this dangerous offense. So here's a two-part primer with Tech Coach Paul Johnson. First, watch the video for a lesson from the Coach himself. Then read below how Johnson assembled his Frankenstein monster to shock and befuddle defenders -- especially those like FSU's that read and react quickly.

"I was a defensive coach when I first started out at Georgia Southern in the 80s. We always felt the hardest offense to stop then was the wishbone with two wide receivers. In '85, Coach Erk Russell asked me to take over the offense. So we started running more option, coupled with different schemes out of the option, and we've been running it now for 23 or 24 years. Through the years, whenever somebody came up with a way to defend us we'd add some plays or add something to the formation, and it's just kind of evolved. So it's a combination of a bunch of offenses put into one. 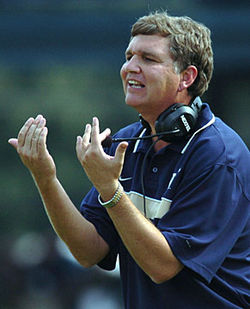 "We can basically run all the plays that you run out of the I if we choose to. The personnel is kind of different for us. The B back is the featured guy. And with the quick motion we can do a variety of things.

"The last few years we've been very heavily option-oriented. Not just the triple option, but the counter, etc. And then we've incorporated some of the run-and-shoot passing game, the sprint-out game, three receiver routes, or even four receiver routes. So you can do anything out of this offense that you can do out of the others. "

Is it a read-and-react situation for the QB?
"A lot of the options are reads. It actually depends on how much he can handle and how good a player he is. You can limit what he has to do if the guys around him are better. If we have a really strong front, we may not ask him to read that much. Ideally, the perfect guy there is someone who understands the system and can get you in the best direction. He's more involved in the running game with us. Because if the defense has to account for a runner at quarterback, it changes the way they play."

How long will it take for your players to really "get" this offense?
"There's no magic wand. We may not put any more in until we can do what we're trying to do now. We've got enough in now to play with that we can do it right. There are a lot of bells and whistles that we could add during the game. Tweak the way you're blocking, tweak the formation. The big thing is, we keep doing what we do and we'll get good at it."