« If playing a Div.1-AA team is an early season test, Colorado almost failed it | Main | Colorado's hometown sports writers split on outcome of Noles and Buffs » 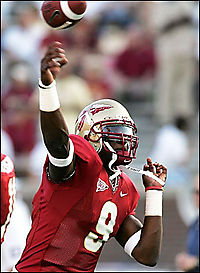 Steve Ellis of The Democrat reported recently that Xavier Lee, after his TE experiment with Baltimore, had a Canadian League tryout with Calgary. True, but Lee is now headed South again. Not because he couldn't cut it, but because it was more of an audition for a future roster spot.

We talked to Calgary's Director of Scouting, John Murphy, who explained how the CFL does it.

"What we do up here is, for 30 days after the NFL makes their final cuts we're allowed to give selected guys a week to ten day evaluation. Xavier was the first quarterback we tried out. We wanted to see how he looks in our offense, show him the (Canadian) game -- it's a different size field, you've got 12 men, and different in what your reads are and getting the ball out. So we get that on tape, then in the off season the coaches evaluate and decide which of the guys could come in and be our third quarterback next year."

What were his plans after leaving Calgary?

"We told him it would be smart to do some Arena League tryouts and see how his game looks indoors. A guy like Xavier would have been perfect for NFL Europe (now defunct). But I think he'll try some of the Arena teams down in Florida and see how they like him. We had a high opinion of him up here, but it takes time to learn this game and system. Our backup quarterback is in his third year in the system and is no closer to being #1 than Xavier is.

"Also, the weight that he added as a tight end. If he's really serious about playing quarterback in the CFL, Arena League or even NFL, he needs to work on that. But there's a lot of raw skill there. And anybody who had any questions about his arm strength or learning ability...we never saw any problems. He's a great guy to deal with. He was a 'yes-sir, no-sir' person. He was on time. He stayed and watched film. So if it's not in Calgary, Xavier Lee could be somewhere playing football."