« It's Ponder vs. Marve: the Duel within Saturday's Shootout | Main | How the Canes will attack FSU on Saturday, a.k.a Tight End Deja Vu »

Forget swagger, the Canes are just trying to get their confidence back after UNC loss 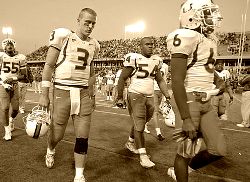 That, among other things, is what Shandel Richardson, UM beat and blog writer for the Fort Lauderdale Sun-Sentinel, told us. It's part of this Q & A session about the Canes.

Patrick Nix is getting heat for putting a governor on the offense Saturday when UM appeared to have it won. Does he open things up on Saturday, knowing it's such an important game?
Yeah, the offense is slowly opening things up and has shown progress each week. You can expect a little more creativity from Nix. He's been solid since the UF game. I'd say Nix has been in control of the playcalling because one of the things Randy Shannon has stressed is letting his assistants do their jobs. He's been more like the CEO, running the company and delegating responsibilities.

Will UM's defense be gunning for Ponder against a young OL, or play more of a read and react style now that FSU show signs of a run game?
After the UNC game, the Hurricanes just need to worry about regaining their confidence first. That's the key before they can think about gunning for Ponder. You'll see some aggression, but probably not too much. The way the UNC passing game carved the secondary should make UM think twice about blitzing or leaving guys in single coverage.

What do you know of UM's injury situation and how it will affect the starting lineup on Saturday?
No real new injuries. The only unit banged up is the secondary. Starter Randy Phillips is out and Vaughn Telemaque (freshman) is likely out. Chavez Grant is banged up and may be replaced by DeMarcus Van Dyke. Marcus Forston returns at defensive tackle.