« Christian Ponder holds up 5 fingers for things to be happy about | Main | It's Ponder vs. Marve: the Duel within Saturday's Shootout » 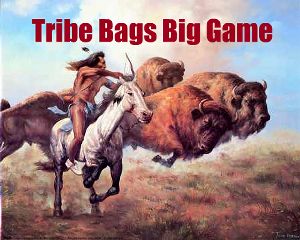 by Bill from Tampa
1. Good move by Colorado for not bringing their mascot, Ralphie, to the game. They got all the trampling they wanted from one Antone Smith.

2. Clearly the Buffs were not paying attention. Jimbo told you he was going to run the ball more this week.

3. In an obvious shot at FSU’s offense came the comment from the TV booth “You can win a lot of games with great defense and special teams.” Someone forgot to mention that to Antone.

4. The Strangest Signal from the Sideline to Christian Ponder Award goes to Drew Weatherford for his sticking his tongue out and tapping it with his fingers. I’m not even going ask what that play is.

6. Since speeding up the time it takes time to play college football games is an issue these days, here’s a time saving idea. After having two delay of game penalties while trying to line up for the field goal, just have FSU go ahead and accept the penalty before trotting out the kicking unit and automatically deduct the time off the clock.

7. After hearing that ancient recording of Bobby singing “We are the Seminoles” that ABC showed during the game, music lovers everywhere can be VERY glad that if Bobby was considering a career as a professional singer he made the correct decision as to what path to pursue.

8. Queried at halftime as to what he will tell his team in the locker room, Bowden responded “I told you no penalties, no turnovers, so stop it!!” Asked further if they will get any dadgummits Bobby replied “Oh yeah, they’ll get that.” I wonder what the over and under was on the number the team got?

9. The poignant question of the week came  from Mrs. BFT who asked after learning of Wake Forest’s loss to Navy, “They couldn’t play like that last week?”  Obviously FSU showed the Demon Deacs how to turn the ball over and they learned well.

10. And speaking of Mrs. BFT, following her other question, “Why do they call it Old Miss?” I’m not sure why I got that special stare reserved only for annoyed wives after providing a sincere and well thought out answer, “because it’s old?”

11. Sign seen at ESPN’s Gameday show on location at Athens GA.: “Hi Mom” Aside from the fact that we have no clue which Mom was being referred to, someone please tell this person there is this new fangled invention called cell phones.

12. To the UGA fan also at Gameday carrying the sign reading “I wash my dirty clothes in Tide”, will you be changing brands?

13. Another sign seen at Gameday  (yes, we were really into the signs yesterday): “Richard Gower” and a downward pointing arrow. So the next time you see some guy who looks like a big piece of cardboard with that name and a direction indicator on it attached to a stick be sure to stop and say hello.

14. More Gameday stuff: If anyone saw that shot of the bulldog pup named Little UGA, can you tell me what he looked like. I was FAR too busy looking at the beauty pageant queen holding him. Lucky dadgum dog!!!

15. Southern Cal needs to schedule OSU more often. No, not that one in Corvallis, OR, the one they beat 35-3.

16. Urban Crier ….. er, um … Meyer … yeah, that’s it, Meyer … on the blocked PAT: “It's illegal to hurdle a player on a field goal," Meyer said. "I grabbed [the referee] on my sideline early in the game and said, 'Listen, they're doing this.' He made a comment, 'He went through the gap.' With the way we teach field-goal protection,  there should be no gaps." Yes, yes …. We all know your beloved gatros (their …) aka cros of XXVI almost never, ever make a mistake. Must have been that 1% of the 1% of the times they do.