« Points and Counterpoints on why Drew should play and Bobby must go now | Main | It's not easy being a Buffalo in 85% humidity, and other pre-kick Nole Nuggets »

Attn FSU Coaches: Here's the game plan that had Colorado on their heels 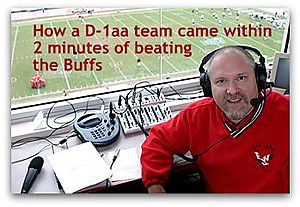 Larry Weir (pictured here) is the play-by-play man for Eastern Washington. He called the game on September 6 when the Eagles came within a whisker of upsetting Colorado (final score, 31-24). We asked Larry how this 1-AA team dominated the game and kept Cody Hawkins off balance most of the day.

"Eastern was able to put a lot of pressure on Hawkins, and that helped limit him. And they did it without much blitzing, mostly a strong rush by just the front four. Colorado had one of their guards suspended for the game, so they played a redshirt freshman and true freshman at guard, and they were really struggling to block Eastern's tackles. So I think they had to do a lot of adjustments of routes and so forth because Hawkins didn't have a lot of time to throw."

How did the secondary play Colorado?
"Eastern played mostly zone. But they did try to give Hawkins different looks to confuse him. They would show man and then back into zone. Or a cover three look then drop back into four.  But it was still mainly the pressure they were able to get from that down line. Eastern put the heat on and basically Hawkins had one read and that was it."

Eastern's offense had a good day too, rolling up 350 total yards.
"I don't think Colorado was completely ready to play an FCS opponent. And Eastern came out aggressively with underneath passing which got Colorado back on their heels. In that first half Colorado played deep and gave Eastern a bunch of short routes. But in the second half CU got much more aggressive -- challenging Eastern's receivers -- and started blitzing more, while playing more man coverage to take away the short routes. Eastern struggled in the second half with those adjustments."

How was Colorado able to pull out the win?
"It was an interception by Chapelle Brown for a TD with around 1:40 left to go. That broke a 24-24 tie. Eastern had been driving and they have a very good kicker. They were just trying to get the ball close enough for a field goal. But Brown jumped a route, intercepted and took it in for a score. That was the ball game.

"Also, in the fourth quarter, that lack of depth -- the 22 scholarship difference between the two levels -- began to show up."

So how good is Colorado?
"I thought Colorado had a solid group of linebackers and a solid secondary. I didn't think their offense was all that special. Now they looked a little different against West Virginia. Their defense was stout, but I thought their offense would struggle. And outside of that first drive, it did."