Quarterback Quandry: Who's the best guy
for the worst situations 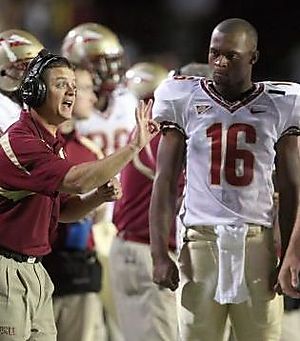 Who should be under center and when? We think the choice has much to do with this year's weakest link, the offensive line. So here's part three of our FSU Quarterback scenarios for 2008.

Worst Case Scenario: Things go South in hurry as Trickett's kiddie korps struggles. Too many snaps turn into a Chinese Fire Drill. Stuff happens. And the inevitable -- injuries -- further slow the learning curve of linemen who will weather the storm and make the future look bright.

Advantage: D'vontrey Richardson. Who better to make the most of the situation? Using his escapability and quick release, D'vo can turn chaos into positive yards. Simply put, Richardson allows Jimbo to make the best of bad situations (for proof, check out any of his videos from high school). Would he be an overnight success? Probably not. But you'll recall it took Charlie Ward a few games to get in the groove.

Alternate Scenario: A blend. Some kind of two-headed QB combo that leverages the best talents of both Richardson and Ponder.

Major Disclaimer: Our three scenarios are based on a fair QB competition, including who "wins" the job in practice and other intangibles. All without regard to school class, age, pre-conceptions, etc. If scenarios two or three unfold and Drew continues to be the starter, FSU fans' fears are realized and something is indeed rotten at Doak. (Note the Nole Poll on the right in which fully one third of voters believe Drew will be a fixture at QB, no matter what happens.) Nothing against Drew, he's a great role model and excellent representative for the school. But is he the best man for the job just because he's a three-year starter? Because he's earned it? Because he might make fewer mistakes? We hope the beginning of the Jimbo era means a return to coaching that pulls out all the stops to win, instead of playing not to lose.