« Five reasons for hope as Noles work to end the breakdown on third down | Main | Dead Man Walking, JoPa Makes His Move and Other Week One Rants »

FSU has a tight end gem just waiting to shine 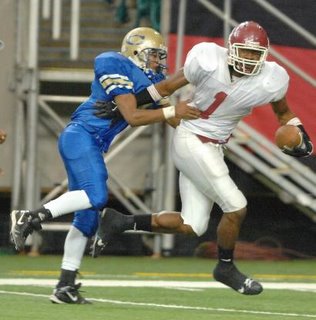 With a long list of Nole tight ends in academic purgatory or sitting out punishment, what in the Sam Hill can an offensive coord. do? Play Jarmon Fortson, that's what. The big freshman is a glue-fingered, physical specimen (check the photo) who appears to be made for the position.

And we're not just talking about a placeholder at tight end. Fortson is a playmaker, especially in big games. In last year's Georgia state semi-finals, he scored 20 unanswered points in the final six minutes to pull off a miraculous 26-24 comeback, making spectacular catch after spectacular catch. Newspaper accounts the next day said "The big, physical receiver will be a threat in all levels of the passing game."

Jarmon is taller than Brandon Warren, though about 20 pounds lighter. So put the kid on a pizza and milk shake diet for the next week, teach him the basic routes and blocking schemes, and let him fill the bill until FSU finally has a stable TE situation. Or unless and until Forston proves that he's best man for the job.