Four More Noles on the Bubble in '08 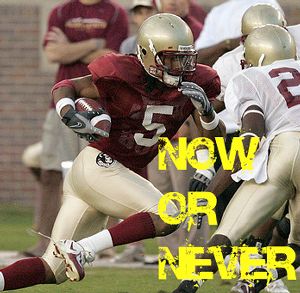 Antone Smith - This year, will the real Antone Smith please stand up? We're hoping it's the one who blasted through holes and broke tackles in the Music City Bowl.

Joe Surratt - He's the biggest, most experienced fullback, but third on the depth chart. This may be more than a performance issue. Could be that Joe, a Senior, is still in the dog house over last year's midnight mischief with fellow reveler, Geno Hayes.

Rod Owens - After only six catches for 55 yards last season, the redshirt Junior is #2 behind Preston Parker at one WR spot. But with Bert Reed and Taiwan Easterling nipping at his heels -- plus Corey Surrency and Jarmon Fortson coming aboard -- Owens must impress in pre-season.

Dumaka Atkins - Another Senior down to his last chance. Atkins can make a major contribution by adding depth at DT, especially in the first few games when suspensions will thin the ranks to a few good men.