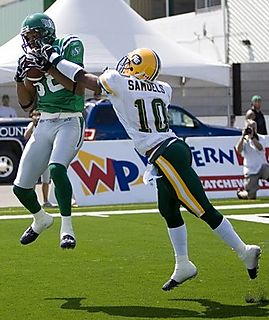 The guy famous for the nastiest Cane-clobbering hit ever by a Nole is the latest to be cut by a Canadian Football League team. Stanford Samuels is out after one season with the Edmonton Eskimos (getting burned, like in the photo, definitely didn't help). But according to this story in a Canadian paper, Samuels might be get a second chance with Winnipeg, his CFL  home in 2005 and '06. 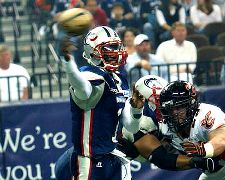 Meanwhile, Adrian McPherson is the last former Nole on Canadian league rosters. After bouncing around for a few years in the Arena game, he's the nouvelle QB in Montreal. With three TD passes while playing part time in his first two exhibition games, he could unseat veteran Anthony Calvillo before the regular season. At least he's farther up the depth chart than Chris Leak, who's down on the team's inactive list.

How does McPherson rate on your list of former Noles? Let us know on the Nole Poll.