« Can FSU's D-Ends Bring Back the Sack? | Main | Fisher hoping to reel in two or more at his favorite Carolina talent pool »

T.K.: "I kind of don't give a damn if we go
to the NCAA Tournament" 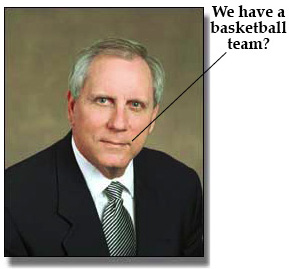 Good thing T.K.'s shooting from the hip didn't involve a gun, or he'd be up on charges for wounding FSU's basketball hopes. Yeah, that's just what blue chip hoop prospects want to hear when choosing a school.

So what does Seminole basketball analyst Bill from Tampa think of T.K.'s comments that made FSU fans everywhere utter a collective "Doh!"?

BFT: Everything he said has some fact in it. Certainly you don't want to win at all costs like say a Kelvin Sampson, Clem Haskins, or Dave Bliss wanted to win. But apparently in TK's list of priorities for basketball, going to the NCAA is well down his list. We know that he would not tolerate that same standard with football with as much time as he devotes to managing that program.


Of course it was a clear indication of TK's position when he gave Leonard an extension through 2012 before last season began. So his statements should come as no surprise. Except for the part about not giving a damn about the NCAA tournament. That one is just stunning. I don't know how the players might react to that. But as a fan I just cannot agree with TK.

Does this give Hamilton a pass on building a strong program?

BFT: Based on his statements, you'd be inclined to say he feels the program is in strong shape now. His criteria is academics, graduation, players with character (which they all have), and a coach involved in the community. Those are his priorities. Winning is in there obviously as the 20-win mark appears to satisfy him. And to be honest, all that is true. It's that one benchmark, making the NCAA tournament, that muddles the answer to that question. If FSU had made the NCAA in either of the last two seasons, you aren't asking that question. But after ten years of futility, FSU fans are bound to be antsy, frustrated, and just won't see it the same way as TK does.

Is the talent there in the next few years to earn an NCAA berth?

BFT: Well, it's always hard to say for sure when you have so many freshmen coming in this year and how their games will translate to the college game. Certainly several players come with high accolades, such as Chris Singleton. A couple of them I've seen play at the high school level, and they played quite well. There are aspects they will need to improve upon to be successful in college. But the tools are there. So, yes, as has been the case the last few years the talent is probably there to get to the NCAA. But for various reasons FSU has just not been able to get it done. You'd think the law of averages would eventually favor FSU at some point and the breaks would start going the Seminoles' way.