Special Guest: Athlon's Senior Editor on the '08 Noles and the underachieving ACC

As usual, Athlon's college football magazine is the first to hit the newstand. So we hooked up with Senior Editor Mitch Light to get his 4-1-1 on this year's Noles. 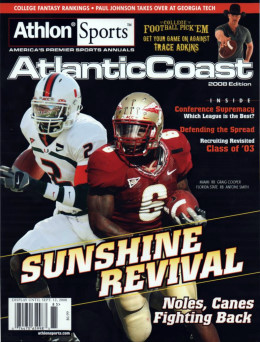 Where does Athlon see FSU finishing this year?
We've got the Seminoles 26th overall, obviously knocking on the door of the top 25, and third in the Atlantic. It's still a program with a lot of talent, but also a lot of issues, most notably on the offensive side of the ball. They  finished 80th in the country last year (in total offense), and have quarterback concerns and questions with Drew Weatherford coming back. I know Ponder played well in the spring, and the offensive line will be young again. So I'm sure this program will be very, very good again, but probably not this year.

Who finishes better this season, FSU or Miami?
FSU. We've got Miami 43rd overall. They've got to find a quarterback -- and some heart too. I don't know what happened last year, but they lost their last four or give games and imploded down the stretch.

How do you see the Noles in some of the key games...

Let's start with FSU - Clemson?
You have to give Clemson the advantage. They're the most talented team in the league, with the exception of some offensive line issues. They have the best quarterback in the league, and probably the best wide receiver, and maybe the two best running backs. Obviously it helps that the game is in Tallahassee, but I think you have to give the edge to Clemson.

How about against Virginia Tech?
I would call that a toss-up and maybe give a slight edge to FSU because it's at home. We've got Tech 21st, but I think they have a lot of issues this year. Running back, which is usually a team strength, they don't have a running back and might go with a true freshman there. They've got two quarterbacks, which isn't always a good thing. And their offensive line gave up fifty sacks last year.

And then there's FSU - Florida.
We have Florida all the way at the top in our Top 25, so I'd give Florida the decided edge in that game. Talent-wise, right now, the Gators just have the edge. I don't think Tebow will run the ball as much this year. They're better in the backfield with Moody coming in and they've got some more options there. I think they'll be better defensively this year. And their schedule isn't as challenging as Georgia and other SEC East teams.

Who will be the biggest surprise in the ACC this year?
Probably Carolina. We've got them second in the Coastal. I think their running game will be a lot better with Greg Little there, and Butch Davis is a proven coach, so I think they're on the way back to the top of the league. Carolina has everything in place to be a good football school. Combine that with a guy like Davis, who's a good recruiter, and I think they'll be a perennial top 25 team, starting in the next couple of years.

Finally, how does the ACC stack up this year against other major conferences?
I don't think it's going to be a great year for the ACC. I like Clemson a lot, but I think there's a drop off after that. You've got some solid programs, but I'd pick the ACC fifth overall, just ahead of the Big East. When your two flagship programs -- FSU and Miami -- are not up to par, and Virginia Tech is not great this year, it's hard for the league to be what it should be. I think the ACC has potential, but it's just not great right now.