For FSU roundball, Kitchen is a steal --
in more ways than one 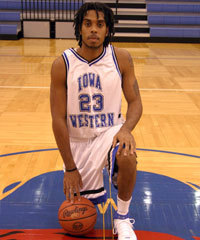 So Florida State finally announced today what had been known for some time: that combo guard Derwin Kitchen was coming to play for FSU next season. You can look at all the scoring and rebounding and assists he had at Iowa Western Community College.

But here's a stat that jumps out at me, 1.8 steals per game (he averaged 5 per game at Raines High School) good for first in the conference. Now put that next to Toney Douglas' 2.65 steals per game, and BTW that was good for first in the ACC, and a team that had question marks with its perimeter defense last season might be near to impossible to get an entry pass into the post past them. Just think of them as potentially two Tim Picketts on defense. Now that would be fun to see. Here's hoping that's the case.