« Parker's apology: today's equivalent of writing 100 times on the blackboard | Main | T.K.: "I kind of don't give a damn if we go to the NCAA Tournament" »

Can FSU's D-Ends Bring Back the Sack? 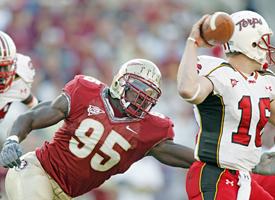 Position Analysis by
Wild @ Heart Nole
The Players
Throughout this decade, the FSU pass rush has disappointed. This not only led to fewer sacks, but put additional pressure on the secondary. That's in part due to changing offenses that get the pass off quicker, but if NFL scouts, GMs and coaches opinions matter, it's a drop in talent as well. Only four FSU DEs have so far been taken in the NFL draft this decade, only two of those on the first day (Kamerion Wimbley, who was drafted as an OLB for the NFL and Jamal Reynolds). In the 90s, 10 FSU DEs were taken, 7 in the first three rounds (again, a handful were drafted as or converted to OLB in the NFL).

But there is great promise in 2008. Will it live up to it? Last year, Everette Brown (6-4 246) was ranked among the nation's pass sack leaders, the first since Wimbley and Brodrick Bunkley roamed the field in 2005. Brown finished with 6.5 sacks on the season, despite the absence of another strong threat. Kevin McNeil (6-2 255) enters the fall as the other starter. McNeil was slowed last year while he continued to recover from an off-season car accident, but had an excellent spring.

What is exciting Seminole fans though is the promise of a junior college transfer named Marcus White. White, 6-2 245, was a five star rated athlete and the defensive MVP of the JUCO national title game. His athleticism makes one drool, and was coached by Butler's defensive line coach Steve Braet, who has produced 24 JUCO All-Americans and 3 NFL players. White and Brown look to be the best bookends FSU has had since the 1990s.

Historically, however, FSU's outside pass rush has been strongest when there was a strong, deep rotation, like in 1997 when Andre Wadsworth (1st round in 1998 draft), Greg Spires (3rd round), Julian Pittman (4th round) were seniors and Tony Bryant (2nd round in 1999 draft) was a junior. The deep rotation kept the defensive ends always fresh and attacking at full-speed. If the potential turns to production, 2008 may be exciting for those looking for a semblance of the old.

Besides the already mentioned McNeil, Neefy Moffet returns for his senior season. Moffet was yet another four star recruit at DE for FSU, and has at times flashed his potential. He's listed as Brown's backup. Jamar Jackson was highly rated out of high school, but redshirted last season after tearing an ACL. He enters the fall listed as second team and ready to make up for a missed season.

Other newcomers include true freshmen Everett Dawkins and Toshmon Stevens. Dawkins is yet another four star rated addition to the mix, and has the size to jump in the mix. Stevens isn't as highly rated as the rest, but that may only be because of his size. Listed as 6-5 205, he might spend the season adding weight, but he has the frame to grow and the athleticism to contribute in the not too distance future.

One Man's Projected Depth Chart (Post Suspensions)
Marcus White is projected to come in and start right away, and I won't go against conventional wisdom on that. White and Everette Brown should make for a great pair of bookends. Kevin McNeil should back White, Neefy Moffett should back Brown. Jamar Jackson should see plenty of reps as the fifth DE, and if Everett Dawkins comes in ready to learn and play, FSU may indeed have a true three deep rotation. This is one position that may be at the dynasty years' typical depth and is close to the dynasty years' mix of experience.

Defensive scheming
While the potential is great for the outside rush, the lack of interior depth and potential lack of inside pressure is a concern for 2008. Add in the depth at linebacker and common mantra of getting the best eleven on the field, a real question is will Mickey Andrews and his staff deploy some 3-4 lineups?

Certainly it is not an every down solution. Three man defensive lines typically require larger linemen and most 3-4 schemes utilize larger linebackers on the outside than FSU has on the roster. The last couple of years, DEs Alex Boston (6-2 262) and Justin Mincey (6-5 265) permitted some use of 3-4. But now Boston is trying to make an NFL roster and Mincey has moved inside permanently. McNeil and Moffett are currently the only two DEs over 250 lbs. So the use of the 3-4 is unlikely in every down situations, but might be useful on obvious passing downs where stopping the rush is not a significant concern.

Bottom Line
Certainly the sack totals will be up this year, and hopefully the interception opportunities as well with rushed quarterbacks throwing bad passes.The defensive end position appears to be one that may just be back to the dynasty level, and will likely prove to be the strongest position on the defense, and perhaps on the entire team. Will the rest of the defense compliment this position well?