« Meanwhile, back at the P.T. train wreck: Many questions, few answers | Main | What a Difference a Year Makes »

So you call yourself an FSU football fanatic? 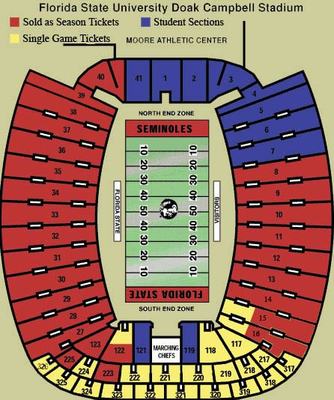 We've been critical of how FSU's athletics handled the P.T. Willis firing. Now we're shamelessly beating the war drums for season tickets. Why?

A critical element in the Noles return to greatness is you. A stadium full of non-stop chopping fans really makes a difference on the field. The season ticket deadline is Friday. So Monday we talked to Patrick Martin, Asst. Athletic Director for the Ticket Office, about getting seats without losing your shirt.

Can you still get season tickets without a booster contribution?
That's correct. But we have to wait until all the numbers come in to know how many non-booster season tickets are available. The priority three seats (in both corners of the North and South end zones) --  if you're not a booster, and I've got season tickets there, that's where I'd put you.

Even the lowest Booster contribution of $60, would give somebody an advantage over non-boosters, right?

Any other advice for people with tight finances this year?
Well, we have a payment plan for those renewing their tickets, though not for new people. But if you're renewing on-line with a credit card you can spread the cost over three payments.

*     *     *     *     *
So are you an FSU football fan or fanatic? The latter are drawn to Doak like Muslims to Mecca. Fans? Well, they're usually on the couch. So get off that sorry sofa and dig in the cushions. Sell something on eBay. Even if you buy single game tickets, this team needs you in the stands, not in front of the tube. Besides, is there really anywhere else you'd rather be Saturdays in the fall?