It's not nice to play tricks on old people: Canes' cut up ambushes Bobby 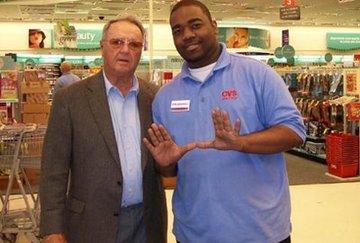 Here's a photo making the rounds of Miami message boards. The story goes that Bobby was in a CVS Pharmacy when an employee asked to pose with him for a picture. As always, the obliging Bobby was more than ready to accommodate a fan. Except this guy was a fan of U know who -- which became painfully obvious as the shutter clicked.

Bowden's expression says it all: "Dang, I've been had."

Hey, Coach. Instead of rolling Randy Shannon's lawn, how about getting the last laugh on all Canes fans come October 4th at Dolphins Stadium.