« The case for an indoor practice facility at FSU, part two: UNC's indoor advantage | Main | One of FSU's Best Receiving Corps Ever (on paper, that is) » 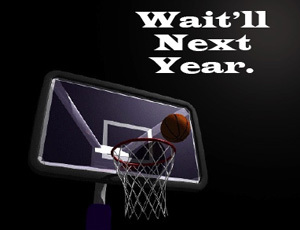 Florida State’s first ever meeting with the Akron Zips will be a forgettable one. The MAC tournament runners-up outscored the Seminoles 14-9 in overtime Tuesday night on the strength of three three-pointers by Ohio State transfer Nick Dials to defeat FSU 65-60.

It was certainly a game Jason Rich would like to forget. Although he pulled down 10 rebounds, the  senior guard’s last game was marred by 10 turnovers at inopportune times and just 7 points.

He wasn’t alone. Toney Douglas and Ralph Mims each had just 8 points.

The Zips’ defensive strategy was obvious; put pressure on the guards when they had the ball, close the driving lanes, and force FSU’s frontcourt to beat them. It worked quite well as Uche Echefu and Ryan Reid had 20 and 14 points respectively.

Douglas however did send FSU into overtime with a driving layup with nine seconds left to tie the game at 51.

But it wasn’t enough as Douglas could not shut down Dials who was wide open above the key after Douglas was rubbed off by a screen on the right wing, open in the left corner when Douglas helped on penetration, and although Toney had a hand in his face, Dials nailed his third three of the extra period from the right wing.

The  Seminoles started the game in a manner they had managed to avoid for quite a while namely a long cold shooting slump. The ‘Noles went 9:30 making just two baskets on their way to trailing Akron 20-5.

Akron took the lead back and with a chance to take a halftime lead Rich was called for over and back when he was double teamed out at the timeline 10 seconds before intermission.

The second half saw a back and forth affair with six lead changes and one tie in the first six minutes.

A wide open jumper from the free throw line by Echefu and a runner by Rich gave FSU its largest lead at 40-36.

The Zips took control and ran up a 48-42 lead when Dials nailed a three from NBA range.

It was looking bleak for the Seminoles until Linhart, a 70% shooter from the line, missed two free throws and was called for traveling in the late stages of the game.

That set up Douglas’ layup after Mims had made two charity shots.

But, despite controlling the boards 43-29, too many turnovers (23) and a efficient, patient style of offense that has often given FSU problems were too much for the Tribe to overcome in overtime.

Prior to the game, the ‘Noles were 6-0 in first round games of the NIT.

And so ends the FSU men’s basketball season with a record of 19-15 missing an opportunity to reach twenty wins for a third consecutive season for the first time  since the 1992-1993 season.