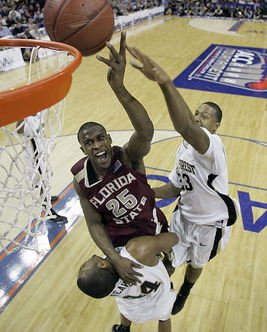 Jason Rich had that look that he was not about to let his team lose this game. Saying afterwards in the press conference that he knew the season was on line in terms of having any chance at making the NCAA, Rich scored 21 points in leading Florida State to a 70-60 win in round one of the ACC tournament.

What made Rich’s MVP performance remarkable was that he scored all 17 of his second half points in a span of 5:44.

With Wake Forest putting the squeeze on FSU and trailing just 41-38, Rich just about single-handedly held the Demon Deacons at bay with a variety of shots that included free throws, three pointers, and acrobatic whirling shots in the lane.

What was a tight game that seemed like the Seminoles were just holding on by the fingertips saw a 59-49 margin develop following the senior guard’s last basket with 5:27 left to play.

That left the ‘Noles firmly in charge of the game.

And where Rich left off, Ralph Mims, Toney Douglas, and Ryan Reid picked up.  Both Mims and Douglas contributed by converting the necessary free throws. And Reid with a huge offensive put back just before the shot clock sounded to give FSU a 62-55 with a minute and half remaining.

Leonard Hamilton was obviously pleased with his team’s performance that ended a 0-3 streak against Wake  Forest in the ACC tournament. Calling it a an “overall good solid brand of basketball defensively” he added “we just told them to just get down in their stance and help stop the dribble penetration into the lane and get back quick to cover their man.”

When questioned about Reid, who scored a career high 12 points along with 7 rebounds, Hamilton noted that the sophomore spent the last couple of weeks coming back into the same shape he was in before his nine game suspension. “We’re not posting him up so much to get him the ball. But we try to get it to with ball reversal or off the bounce.”

The ‘Noles started out strong gaining an early 9-2 advantage. After Wake tied it at 11, FSU rattled off a 17-4 run after Douglas came off a high screen by Matt Zitani nailing a three from the right wing giving the ‘Noles a 28-15 lead.

Dino Gaudio called a timeout for his Deacs right after that. Wake responded by attacking inside and with better defense whittling the lead down to 31-26 at the half.
The second half didn’t start out very well for FSU with the Tribe committing a couple of turnovers and having some shots blocked.

With the lead now down to 31-30, Hamilton was forced to call a timeout at the 17:44 mark to refocus his team, which responded with seven unanswered points highlighted by a Mims steal and coast-to-coast layup.

Although the ‘Noles had a few occasions where transition defense broke down such as the Jeff Teague basket that immediately proceeded Rich’s scoring outburst, FSU never trailed in the game again.

After the Seminoles beat a full court press and lobbed a baseball type pass down to a wide open Mims for the easy layup with less than a half minute left, Gaudio called off the dogs and let the clock run out.

The win marked the fifth game in a row resulting in a victory when FSU was leading at the half.

Also in double figures for the Seminoles were Mims (16) and Douglas (10).
As a team the ‘Noles shot 46% from the floor and 15-19 (79%) from the charity stripe.
The 19-13 Seminoles keep their hopes of an NCAA invite alive and move on to the quarterfinals to the tournament. That will not be an easy task. As was the case last year in Tampa, FSU will face North Carolina, which swept the ‘Noles in the regular season, in the second round.

What will make the task even harder aside from having to play again in less than twenty-four hours is that Tar Heel point guard Ty Lawson is expected to start.