Memo to Mickey: FSU's biggest defensive challenge in '08 won't be the usual suspects

Dear Coach: We know Wake won't be a piece of cake and the Hogtown team will bring their Tebow attack. But at least you have a pretty good idea of what to expect. 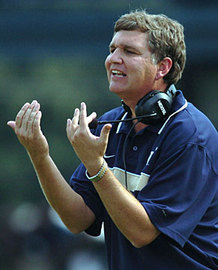 Not so on your trip to Atlanta. Former Navy Coach Paul Johnson will install an offense that gives D-coordinators bleeding ulcers. One so dadgum different -- unique, actually -- you just can't prepare for it in three or four days of practice.

Johnson calls it the Triple Option. Others call it the Flexbone. You'll call it names we can't print on a polite website.

(Note to our readers: It's called the Triple Option because the QB has three options on every play -- or four including the pass. And that's about it. One basic play that Johnson's team will practice over and over until they're running it in their sleep.)

Would you believe TWO offensive line coaches? The OL is so critical to Johnson's Triple Option, two of Tech's new staff will be coaching it.

One for the center and guards, and one just for the tackles. Another assistant will coach both the QBs and the B-backs (the guys who line up behind the QB as the lone back between the tackles).

Oh, and there's no dedicated offensive coordinator. Johnson will handle that himself, being the mastermind of this run-obsessed attack.

But just when you least expect it, Wooosh. Navy rarely passed (they were dead last in NCAA stats, averaging 95 yards per game), but Johnson hints that Tech will. That's because Johnson molds his attack to what his players can do. At Navy, he says, it was tough to recruit O-linemen with the size and talent to pass as well as run block. But that shouldn't be a problem at Tech.

Then there's Tony Barnhart, who believes Johnson will create a new Triple Option Frankenstein that could look more like West Virginia and Oregon than Navy's limited version.

So, Coach, just thought you'd like the latest on what Tech's new regime has in store. But then something tells us you're already on the case, right? 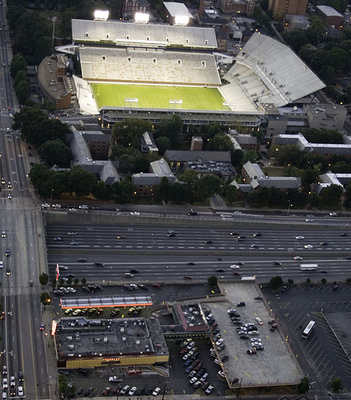 P.S. to FSU fans making plans for the game in Atlanta. You'll discover a new, improved Grant Field since the last time the Noles played there in 2002. Tech's historic old stadium got a much needed facelift in 2003, expanding to 55,000 seats -- many in the new double-deck North end zone (seen above). Restrooms and concessions were also modernized in the expansion. But most important, you'll still be just an onion's ring throw from the World's Largest Drive-In, The Varsity (also in the photo) and cries of "What'll 'ya have!? What'll 'ya have!?"