« A Fred Rouse update for FSU fans who still wonder what might have been | Main | Memo to Mickey: FSU's biggest defensive challenge in '08 won't be the usual suspects » 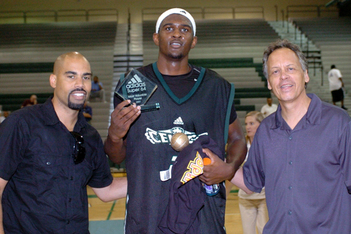 Coming soon to a court near you. He's 6-8 Chris Singleton, who signed an LOI with the Noles back in November. One of five finalists for Mr. Georgia Basketball, Singleton is averaging 21 points, 14 rebounds, four blocked shots and four assists per game for the Dunwoody High Wildcats. Those stats aren't against chump teams, either. His suburban Atlanta school is playing tough competition. Singleton is seen above sporting his LeBron look as he receives an MVP trophy in last summer's Adidas Super 64 Tournament.