« Does it take a Ph.D. to figure if the Noles will have a great recruiting class? | Main | T.K. reveals a piece of the puzzle as FSU's 2008 schedule takes shape »

FSU blows first half lead and the Wolfpack
never looks back 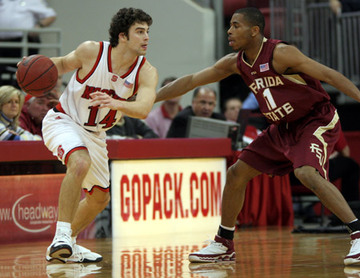 The saying goes that you finish the half strong, finish the game strong and you will come away with a victory more often than not.

Unfortunately for Florida State it was the North Carolina State Wolfpack that adhered to that axiom. In rattling off a 17-0 run in the last 5:08 of the first half and a 6-0 run over the last 57 seconds of the game it was the Wolfpack that got back on the bus to Raleigh happy with their come 69-66 from behind win over the Seminoles.

It was a dejected looking coaching staff and group of players that entered the tunnel at intermission after blowing a 31-19 lead to trail 36-31. When Leonard Hamilton removed his jacket as he walked with his head down you knew that was not a happy coach.

It was an even more dejected looking group after the game as players and coaches alike had little to say about the loss other than they all felt like they beat themselves in giving this game away.

After Isaiah Swann hit a three pointer, the sixth of the half for the ‘Noles to lead 31-19, it looked like FSU had the game under control.

However basketball is a game of runs and NCS’s Gavin Grant started the Pack’s spurt with a three from the left wing. The Seminoles contributed to that run when Toney Douglas turned it over that led to a quick two points again by Grant. To make matters worse FSU turned the ball over three more times in the last 2:35 that NCS State quickly converted into points.

Florida State came out in the second half and quickly closed the gap to one point, 36-35, on two free throws and a basket by Uche Echefu off a great pass from Douglas.

Finally FSU regained the lead 43-42 at the 12:32 mark when Jason Rich drove the ball in along the baseline from the right side and slammed the ball in sending the crowd into a frenzy.

The lead jockeyed back and forth for the next several minutes changing hands three times with three ties.

The ‘Noles were able to take a three point lead at 55-52 on two free throws by Douglas with 6:33 remaining. It was NC State’s tenth team foul.

But seconds later Rich would pick up his fifth foul on a ticky tac call by Ted Valentine. Rich commented after the game that Valentine seemed intent on calling the close calls on FSU but somehow never made any of those close calls on the Wolfpack.

The Seminoles managed to hold off NC State however and Ryan Reid’s high screen freed up Douglas for a wide open three giving FSU a 62-59 lead with 2:47 left to play.

Again FSU managed to hold off the Wolfpack. Hamilton had his team run the clock down and put the play in the hands of Douglas. The junior point guard took advantage of Javier Gonzalez’s poor defense and drove down the lane laying the ball in from the left side. Fifty-seven seconds remained. It would be the last points FSU would score.

Swann lost Courtney Fells in transition who tied it on a three ball.

Again Hamilton had his team run the clock down playing either for the win or making sure he would send it into overtime. Neither option happened.

The ‘Noles ran the same play for Douglas. But he was cut off in the lane and didn’t have the legs to make the jumper. Nor was he able to draw the foul.

Reid however was called for pulling JJ Hickson down who canned both charity shots with nine seconds left.

Douglas’s driving layup, again from the left, was easily swatted away by Hickson that was corralled by Gonzalez. He was sent to the free throw line by Echefu making one of two with two seconds left for the final margin of 69-66 and a disappointed crowd of 7,788 quietly left the Donald L. Tucker Center.

Leading the way for FSU was Douglas with 17 points. Ralph Mims and Echefu both had 14 and Swann added 10.

NC State was led in scoring by Fells with 16 points.

While controlling the boards, FSU had difficulty scoring and was held to just 36.8% from the floor. The Seminole defense however was not as effective allowing the Pack to shoot 46.5% for the game.

For the game there were eight ties and eight lead changes.

Hamilton afterwards could only say about the 17-0 NCS run in the first half that “we allowed ourselves to get into a dogfight.”

With the loss the Seminoles fall to 2-4 in the ACC (13-8 overall) making their goal of a winning conference record much more difficult.

It gets no easier as the Tribe heads to Blacksburg to take on the Hokies on Tuesday night at 7:00 PM.

In other basketball news:  It was not a good day for FSU basketball overall as the Lady ‘Noles lost to Virginia in overtime also by the score of 69-66.

The Seminoles went scoreless for the last five minutes of the first half to trail 36-29. Climbing back from that deficit and again from eight points down in the second half, FSU was unable to keep the Cavaliers from scoring with less than thirty seconds left in regulation.

Jo Kellum’s five straight points in the extra period gave Virginia a lead the Seminoles could not overcome nor could they foul out any of the three Cavs that had four fouls.