« Is Jimbo in secret "talks" with West Virginia? | Main | ChantRant Point - Counterpoint: The Temptation of Jimbo »

From the Pittsburgh Post-Gazette: 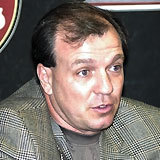 Sources said the Mountaineers' Saturday offer consisted of both a certain salary plus the $2.5 million buyout Fisher would have to pay Florida State under the coach-in-waiting contract he signed barely one week earlier.

Yesterday, when other West Virginia officials became involved in the talks, the offer changed, sources said: Take either a lower salary plus the full buyout amount, or a higher salary without it.

Meantime, Florida State put an all-out blitz on Fisher, 42. The Tallahassee Democrat reported that Fisher, believed to be ready to leave the Seminoles as of yesterday afternoon, and Florida State president T.K. Wetherell, on holiday in Montana, spoke by telephone at least three times. The paper said they discussed the program's direction and the decision-making process until the retirement of Florida State legend and onetime Mountaineers coach Bobby Bowden, whom Fisher is contractually bound to replace.

'I know media reports are circulating regarding the possibility of West Virginia's head coaching position,' Fisher was quoted as saying in a statement released shortly after 8 p.m. yesterday, at least an hour beyond the extension his camp requested, and received, from Mountaineers officials who made their earlier offer with a dinnertime deadline for a decision, one source said.

'I am a native of West Virginia and love the state, but I want to make clear that I am staying at Florida State. I am committed to this university, this program and these players. I am excited about where I am and where Seminole football is headed.'"