Jimbo and FSU: A Match Made in
College Football Heaven? 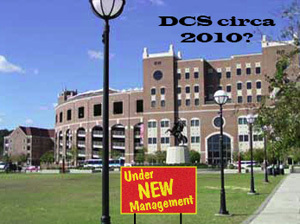 Not this year.
Probably not next.
But in the foreseeable future, the winningest coach in college football will signal the end of his era and make way for a new and uncertain one. That's a given.

But does anyone seriously doubt some kind of timetable for transition is already underway, or at least in discussion? And who among us doesn't think that Jimbo is the annointed one?

It doesn't take a hidden microphone to be all but certain that Fisher and T.K. weren't discussing tree stands on their recent hunting trip.

Whether you love him or have doubts, believe he's a genius or just lucky, Jimbo has the Bowden seal of approval. He's played and coached for them. So for Bobby he's the next best thing to having a son succeed him. Actually better, because the senior Bowden has never seemed hot on the idea of being replaced by one of his boys.

So get used to Jimbo's room-brightening smile and paint-peeling snarl. Because unless the world spins off its access, we'd bet the farm that this is all but a done deal.

Some of us would've liked a little more time to get to know the guy better before jumping into such a major commitment. But just like a young Bobby and Ann couldn't wait back in 1949, FSU is apparently hot to tie the knot with the in-demand Mr. Fisher -- before his head is turned by a more attractive offer.