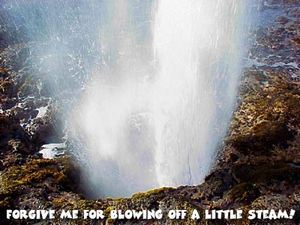 In place of our regular post game feature "Tomahawks and Smelly Socks," we bring you the following rant.
It's either get this off our chests or look up Dr. Kervorkian's phone number.

What a difference a year makes. Last season the Noles came within two toes (Michael Ray Garvin's little toe stepping on the sideline and Gary Cismesia's toe missing a field goal) of beating the team that would become national champs. A Jeff Bowden offense put points on the board against a veteran gator D with two NFL first-round draft picks. Mickey's defense made far fewer mistakes and tackled with authority. Go figure.

Sneak preview of Tim Tebow's Heisman Trophy acceptance speech. "I want to thank my family, coaches and teammates. But in particular, I want to thank FSU. They made a pretty darn good quarterback look like a superhero with amazing supernatural super powers. I couldn't have done it without them."

Back to the future. The story arc of this season begins and ends on an almost identical note. Compare the first half of game one at Clemson
with the second half of the last game of the regular season. They're remarkably similar: a three-and-out offense that can't find the end zone and a defense that's out of position and thinks it's playing touch football. Blecch. Pass the Nexium, please.

And one to grow on? The absolute imperative now is to make the bowl game a statement. It matters not whether it's the Tidy Bowl or the Weed Eater Classic. This team must finish strong to go into '08 with momentum, ensure a top ten recruiting class and give fans reason to look forward to September.