'When you've only got two days of practice,
missing one day scares you." 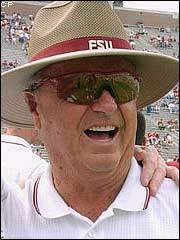 (On Xavier Lee missing Tuesday's practice)
"There's no issue there. We'll try to get him more reps today to make sure he knows what he's doing. When you've only got two days of practice, missing one day scares you."

(Is the team more motivated because of last year's 30 - 0 loss to Wake?)
"Well, you should be. They just
blew us out quickly. But a lot of that was self-destruction. That was a big awakening for us. They're a very opportunistic team that just dares you to make an error."

(How do you defend against Kenny Moore? And does he remind you
of anybody?)
"Yeah, we had a Peter Warrick one time that we'd sneak back at running back sometimes. And, of course, he was a great receiver and punt returner. Moore, you don't see many like that, that can play wide out and then come in and be your running back like he was last year. Just a good football player and he fits their scheme real good."

"We don't feel like we've played out best football yet. And we've just made too many mistakes. We've turned the ball over too many times on offense -- and sometimes that's from not really knowing what to do. Defensively we've given
up too many big plays."

(On preparing for Xavier Lee)
"The big problem Xavier brings to our defense is not only his ability to throw the football, and especially the deep ball, but his ability to run with it."