« Tomahawks and Cinderblocks: Best and Worst of the UM game | Main | Blue Devils Rested and Ready To Knock Off First ACC Opponent Since 2004 »

Duke's new offensive coordinator spent '06 coaching a QB you might have heard of. Does the name Brady Quinn ring a bell? Before that, Pete's coaching resume was literally all over the map. Besides Notre Dame (two stints) and other college stops, he won two World Bowls as head coach in NFL Europe, plus time in the Canadian league.

Vaas's latest act is molding the raw talents of Thaddeus Lewis into arguably the most improved QB in the ACC. Says Lewis of his teacher:

"He comes out and doesn't fear anybody. He comes out with aggressive play-calling and tries to take shots, and he doesn't care who the defense is. He feels our offense can win in any situation. That's how he coaches -- fearless." 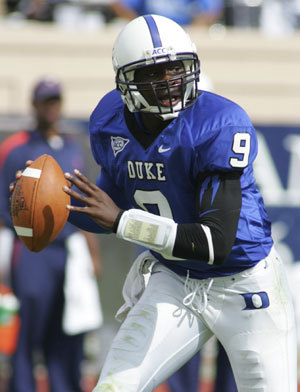 The kid from Miami gets it. Yep, Lewis is another of those South Florida phenoms (Miami Lakes). But one with the brains to join MENSA and be a Dookie. This year he's been cramming on his delivery, reading defenses and playing mistake-free.

"When you throw that interception, you never want to go back and face him," Lewis said of Vaas. "Because he told you not to do it." Lesson learned.

Proof that Lewis gets it. Look no further than the ACC passing stats. The kid is #4 on the list with 1610 yards and 16 TDs. That's just one less touchdown than potential Heisman winner Matt Ryan.

Don't you know Lewis has spent every waking hour between Calculus 201 and Western Civ. 110 watching video of each move and tendency of FSU's secondary?