Bowden: Xavier Lee "not on a short leash"

(Is there a short leash on Xavier Lee?)
"No, we've given him the reins now. I think he's much further along this year than he was a year ago. And I hope he can keep up what he's doing because he gives us another dimension to our offense. But, no, there will not be a short leash on him." 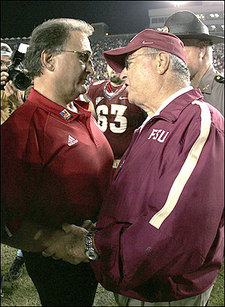 (On Amato's return and facing his old team)
"He just did a marvelous job against us (while at N.C. State). And it's good to have him back. You can imagine how it will be for him, standing on the sidelines looking at all those kids he recruited. That'll be tough on him."

(On injuries)
"Budd Thacker will try to practice today and we'll find out if he's going to be capable of playing Saturday. Neefy Moffet the same way. Overmyer is out. Marcus Sims is out. And then Fluellen's still got that bad elbow. We're trying to find out if he can play."

(On being 116th in the nation in turnovers lost) 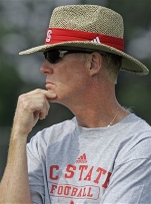 "We had 18 turnovers, 12 of them have happened in two games -- the Boston College and Louisville game -- and half of those were in scoring territory. And when you've got a field goal kicker that hasn't missed a field goal, you give up scoring opportunities doing that. We've got to get it corrected."

(On injuries)
"We haven't had the same consistency you need week to week to get better (because of them). So that's where (injuries) have had its biggest impact right now."

(On he's addressed his players facing Chuck Amato)
"Obviously it's a situation we've addressed and Coach Amato is not going to play in this game, so the best thing we can do is prepare to win...and then after the game it's time to visit."

Key stats forecast how the Noles and Pack will attack

Both teams are fairly close in offensive stats. So it's the defensive numbers that help predict what offensive coordinators will emphasize on Saturday. 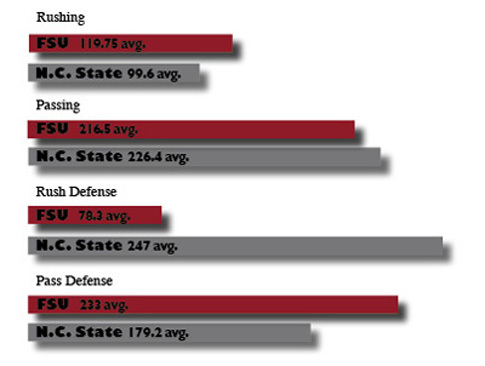 The Noles are #10 nationally in rush defense, while the Pack is 102nd in rushing. But with FSU allowing 233 passing yds. per game (66th nationally), we'd expect N.C. State to go to the air.

Because if Tom O'Brien's team can have the Nole DBs thinking pass, it opens up the run for big tailback Andre Brown (he's ripped Tribe defenders for a total of 292 yards the past two games).

How will FSU attack? N.C. State's defense has done a much better job at stopping the pass. They held the big arm of B.C.'s Matt Ryan to just 142 yards.
But with the Noles run game still a work in progress, Jimbo Fisher will probably hit the Pack with a balanced attack. And, of course, the wild card: Xavier Lee's ability to scramble and keep opposing D's honest.

Herbstreit's Take On The Noles After Beating Bama

ESPN's boy wonder analyst was on the radio Monday talking about the state of the Noles following Saturday's attention-getting win. Herbie told listeners:

"Not trying to take anything away from FSU, but I just wonder if Alabama was low emotionally, finding it hard to get up three weeks in a row (after Arkansas and Georgia.)"

"I think Jimbo is still scratching his head wondering when all that talent is going to put it together."

"I still think they're searching for an identity. They need to pile up some wins now -- and need to get Xavier Lee in sync -- before going up against much tougher competition like B.C., Virginia Tech and Florida."

Translation: The Noles still have a lot to prove before Kirk starts picking them again in the big games.