By Bill from Tampa 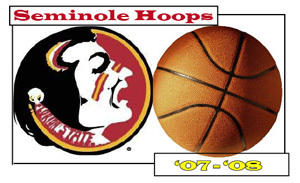 Jeff Cameron of
1270 AM did his Tuesday show from the FSU basketball facility. Cameron had
a chance to sit down for a lengthy chat with Leonard Hamilton as well as some short interviews with some of the team.

Here are some highlights of those interviews.

Hamilton looks for his team to be a little more uptempo this year. Not necessarily to shoot the ball however. In the past that was the goal of the transition game particularly in out of bounds plays where scoring right out of that was the objective. This season while they will look to shoot quicker and not milk the shot clock as much we should expect to see a team more focused on the primary and secondary breaks strictly to force the tempo of the game in the Seminoles’ favor.

Once the ball is up the floor Hamilton will  want his team to move the ball more than last season where FSU utilized far more set plays that the coach likes to use. “We run a system that is difficult for us to defend in practice,", said Hamilton. Translation: it will be difficult for opponents to defend as well. To run that motion offense expect a rotation of at least nine players.

Hamilton believes his team is buying into the concept of “if I create for you, you create for me." Using that concept his hopes are that FSU can have a team of possibly five players averaging
10 to 15 ppg.

Right now he feels the team is a good catch-and-shoot team but not as efficient shooting off the dribble. That’s where new assistant coach Corey Williams comes in. He has been working exclusively with the players in learning to shoot the ball off movement. Williams also brings knowledge of the Macon, Georgia area, a location where Hamilton would like to strengthen recruiting ties. Williams came to FSU from Oklahoma State, played for the Chicago Bulls earning a ring. He was also drafted by the Kansas City Chiefs despite never playing football. His 4.2 forty speed was a factor in attracting the Chiefs attention.

Andy Enfield meanwhile works with the team in shooting off the catch. As has been the case since coming to FSU Stan Jones works with the post players.

The head coach feels his team has improved in many areas including shooting and turnovers. And while improved Hamilton thinks the team could do a little better in finding the open man. The understanding  of the principles appears to be there in his estimation. It just lacks the execution Hamilton desires.

FSU begins Hamilton’s sixth season starting Wednesday night October 31, tipping off in an exhibition  game against the University of West Florida. Though it's an exhibition game Hamilton will ask his team to treat it as a practice but with the goal of winning as well. Tip off at the Civic Center is at 7:00 PM.

Touching on this season’s schedule the staff scheduled teams
they felt would give them a chance at making the NCAA tournament. While it may not appear to be the toughest schedule there are various obstacles on it. But to address the weakness issue Hamilton explained there were no returning scorers over 10 ppg. His thought was that the team did not yet deserve or had earned a schedule of that caliber. The Seminoles will have home games against Pittsburgh, Providence, and of course that team from Gainesville. Some of the road schedule will feature games
at California and at Cincinnati.

Hamilton likes the senior leadership of Toney Douglas, Isaiah Swann, Jason Rich, and Ralph Mims. Add to that the returning players of Uche Echefu who you can expect to see used at the perimeter again on offense and Casaan Breeden. Breeden will see his role expanded and be used at the three spot unlike last season where he backed up Al Thornton. It was not a position suited for Breeden. According to the coach, Breeden will see time mostly coming off the bench.

As for the freshmen, Solomon Alibi, Julian Vaughn, and Jordan DeMercy should be expected to make significant contributions. The coach said the other  freshman, Chris Blake, is not quite ready yet and will be brought along slowly.

Breeden, Swann, and Douglas, were all upbeat about the upcoming season. Breeden is excited about his role. Swann was his usual confident demeanor. And Douglas who knows he can shoot will look to get everyone involved in the offense. Mims noted that in pick up games over the summer how much harder Douglas is to defend now.

Lastly, Hamilton understands the fans frustration with not making the NCAA since 1998. Not using it as an  excuse Hamilton admitted that they just were not prepared for the departure of two players to the NBA and one player who never made it to Tallahassee. The program just unfortunately was not in a position to absorb those kinds of personnel losses like say a UNC could. But they are working to avoid that kind of situation in the future.