« "I feel good about Drew to be honest with you." | Main | Forget Trick or Treat. On Saturday night many Seminole fans will be asking: »

Duke Preview with the Voice of the Blue Devils

After 31 years as Duke's play-by-play man, Bob Harris is the ultimate insider. Which is why we're proud to have him as our guest, answering questions about how much of a handful an improving Blue Devil team will be Saturday night.

How much has Duke improved on offense this year?

"We saw them improve toward the end of last year, especially Thad Lewis the quarterback. And that's the real key, he's gotten more confidence in himself as the season has gone on. Lewis has had a pretty phenomenal start to the season with some strong individual stats. But Duke still has to find a way to win games. They're not going out to play close games, they're going out to win games."

How much impact has Peter Vaas your new offensive coordinator and QB coach had on Thad Lewis?
"One of the reasons Thad has improved so much is Peter Vaas. Vaas put it pretty well when he likened Thad to Brady Quinn.
He said they both have pretty equal arm strength, though Thad (a sophomore) doesn't have the same experience. But most people don't realize that both are pretty doggone good runners and scramblers when they need to be. "

What sort of offense does Duke run? 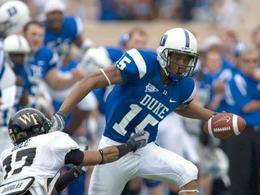 "They've tried to balance it up. But at times they've had to throw first to set up the run -- what a lot of teams do that don't have the big physical running back or tremendous breakaway threat. Coach Roof is trying to take advantage of all the weapons, with the wide receiver corps being the most talented. When you've got kids like Elon Riley (first in the ACC and 11th nationally in TD catches) and Jomar Wright then you've got playmakers. They know how to go up and get the ball in traffic and both have pretty good height."

It looks like Duke is struggling on defense.
"It was improved, but then we lost John Tally, all-ACC cornerback. And this year we've lost two defensive ends. Patrick Bailey who was our best rush end is gone for the year. 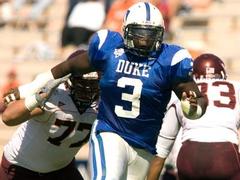 When you lose kids like that it's tough to find somebody to fill in for them. But upfront you've got Vince Oghobaase and Wes Ogelsby. Then the linebackers have been the real strength of the defense. Michael Tauiliili, a junior, led the team in tackles as a junior and sophomore. And now you have Vincent Rey who's the leading tackler this year."

After a week off is the team pumped to upset an ACC opponent?
"They've felt all along they're ripe for beating teams, whether it's an upset or not. So many games have come down to the last couple of possessions. Two years ago Duke lost to Miami 52 - 7. A couple weeks ago with three minutes to go in the Orange Bowl, Duke was driving for what would have been the winning TD, but just couldn't convert a third and a fourth down situation. They should have beaten Wake Forest and Navy -- lost on a last second field goal there. So they've got to get over that hump. They've got to win a game they're not favored in."