« Tomahawks and Cinderblocks: Best and Worst of the Wake Game | Main | Countdown to the Canes: Does UM get a passing grade? »

Countdown to the Canes: Will the real Miami
please stand up 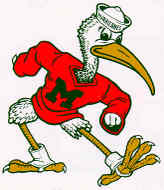 Despite earlier forecasts, Hurricane warnings have been downgraded, while the Noles are still trying to right their ship. But for fans of both teams, it's still
a heavyweight brawl. So for a close-up of the '07 Canes, we turn to an astute
UM observer. Kartik is publisher of www.canesrising.com, a website covering Miami Football and Basketball, and also covers Major League Soccer for EPLTalk.com. Here's our first question for Kartik:

Which is the real Miami? The one that ran all over Texas A&M, or the one that got ambushed by UNC?

"First I'd like to say it's an honor to talk about the rivalry that made College Football what it is today. Florida State and Miami (along with BYU) changed the game forever and gone were the old option based attacks and in came more pro style oriented pass/run combinations. I believe Bobby Bowden and Howard Schenellenberger (along with LaVell Edwards) deserve all the credit in the world for changing the game. Today if I flip on any random College Football matchup it looks like watching Miami or FSU twenty years ago. This is something Gator fans who love to belittle Miami and FSU will never understand. They, like the rest of College Football were followers. We were the innovators. That having been said, both teams are in a bad place right now and I wish I could be more positive about either. I thought FSU had turned things around with the great win over Alabama but the game against Wake was unfortunately what we have come to expect from FSU over the past seven seasons. 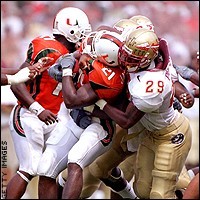 "I believe the 'real Miami' you will see at Doak is much closer to the version that played UNC. Miami played purely on emotion versus Texas A&M (Probably the last night game at the Orange Bowl) and got an exceptional game from Kyle Wright, the best of his career. Miami didn't run the ball well against Texas A&M or North Carolina which is distressing considering Miami is more talented at running back than at any other position. Miami's real weakness on offense is the line and at Tight End, the position which  traditionally has been Miami's strongest and FSU's Achillies heel. (Covering the Tight End of Miami). Miami's Wide Receivers are unsettled but a somewhat talented bunch. But they don't exhibit the typical play making skills Miami's WRs have traditionally shown.

"Against UNC, Patrick Nix who I believe will be a Head Coach sooner or later called a fantastic game in my opinion, but the execution was so lackadaisical and poor on the part of the WRs and O-line it's hard to imagine these same players suddenly showing up against FSU. I believe you'll see Miami go lights out against a very good, and perhaps ACC Championship game bound Virginia team in the final game at the Orange Bowl, but otherwise they have a group of players who like Florida State's take several days off a year and it seems Randy Shannon has come to the conclusion that a disconnect exists between himself and his staff with the players."