« Bowden doubts Thacker will be back for UM game: "He didn't have a good week of practice" | Main | Tomahawks and Cinderblocks: Best and Worst of the UM game »

Countdown to the Canes: Is a famous rivalry enough
to get Miami off the mat? 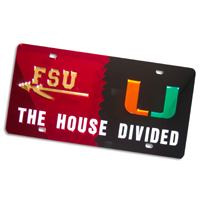 Here's the final Q and A in our series with Kartik of www.canesrising.com.

The Sun Sentinel said UM players were very frustrated after the Tech loss, and some starters wouldn't even talk to the press. Will the FSU rivalry fire up the Canes, or has morale hit rock bottom?

"The players on this team have little resemblance to the former Miami teams. I find it hard to believe considering their consistent poor performances over the past two and half seasons that any one loss would affect this group of guys profoundly. In fact Miami has had a bad habit since 2003 of coming out flat the week after losing, so again, I don't believe many of these guys really care whether the team wins or loses. To a certain extent I miss the "soldier" mentality of Kellen Winslow Jr. Regardless of his behavior, he wanted badly to win games. 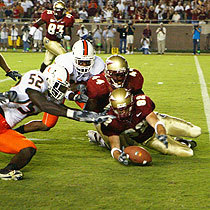 "The FSU rivalry probably means little to the majority of players on this current Miami team. Considering they couldn't get motivated to play Georgia Tech, a program who has defeated Miami now three times on the bounce, I doubt the possibility of losing to Florida State again will get this team fired up. This team lacks leadership and discipline and I know Coach Shannon is disturbed by the type of players he has on this team. I would fully expect several players to transfer or quit the team after the season as Shannon tries to get hungrier, better behaved players who embrace his  tough rules rather than complain and violate them.

"On the subject of rivalries, Miami begins a long term series in 2009 with South Florida, and beginning in 2011 the teams will play on the same day as Florida-Florida State. If 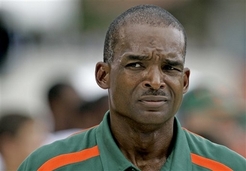 Miami picks it up under Randy Shannon the next few seasons, that should be the start of a classic rivalry. The schools met once two seasons ago the week after USF had shocked Louisville
in the game that really put the Bulls on the map. USF came to the Orange Bowl spent and was crushed, but in the future I would expect both teams to bring it."