« Countdown to the Canes: Does UM get a passing grade? | Main | Bowden doubts Thacker will be back for UM game: "He didn't have a good week of practice" »

Countdown to the Canes: Who's to blame for the slide?

Question number three in our series with Kartik of www.canesrising.com:

Like FSU, Miami continues to have good recruiting classes -- but the programs have still slipped. How much of UM's backslide can be blamed on Larry Coker?

"While much of the blame for slide of the Miami program does lie at the doorstep of Larry Coker, I do not subscribe to the theories of many Hurricane fans that Coker was a lousy coach and that Miami would still be winning National Titles if someone else was the coach in the 2001 to 2006 time period. Coker made some very notable mistakes in recruiting. Chris Bello over at the All Canes blog has a good breakdown of how poor the 2004 class for UM proved to be, and this was a class ranked 3rd in the nation by Rivals.com at the time. 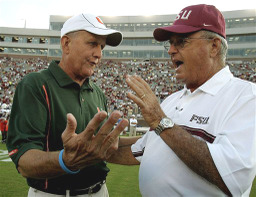 "However I can point to several games during Coker's six year tenure which I believe Miami would have lost had Butch Davis remained the Head Coach. One of these games your readers remember well:
The Wide Left game where Greg Jones ran over UM and the Canes staged an epic comeback for Beitia to even be called on at the end. Had Davis still been coaching Miami, Florida State would have won that game by similar margin to the game in 1996 at the Orange Bowl, then you guys likely don't lose to Notre Dame or NC State later in the year.

"Miami fans have an unhealthy revisionism about coaches. They almost eulogize Jimmy Johnson and now seem to believe Butch Davis was of a similar ilk. Many put down Dennis Erickson, but in my mind he is one of the top 2 or 3 College Football

coaches of the last 20 years and easily the best coach Miami has had. Larry Coker hit some bad breaks: increasing academic standards, Quarterbacks that de-committed leaving Coker with no option but to start Kyle Wright who clearly doesn't belong on any Top 25 type team, a coaching staff that was poached and a local media and fan base who don't understand major conference football. I think FSU has suffered from this also as many FSU fans don't understand how tough the new look ACC is. What FSU accomplished in the old ACC is meaningless in this new mega conference which I believe is the nation's most competitive. What we've learned is that FSU and Miami's fan bases didn't understand how tough this new league would be. Larry Coker fell victim to that, but because of the pressure he started doing things he wouldn't have done previously like firing long time assistant coaches and taking chances on the types of kids he had previously avoided. He also because of this pressure let the discipline slip at the program which reared its ugly head in 2006. Coker stopped acting like himself also due to the pressure. One of his most endearing traits was his class and his sense of humor. He lost both in late 2005 and they were never to return until ESPN hired him.

"I may be very rare among Miami fans but I feel sorry for him. He was a good coach, better than his predecessor for most of his tenure. He won a Championship and lost out on another under the most suspicious and strange of circumstances. He kept the talent level at Miami high until the very end and never had anything bad to say about any one. I think Bobby Bowden liked him personally and as he did with Ron Zook he came to Coker's defense when the hammer fell with some very nice public statements. He made mistakes and ultimately the pressure and a few really bad recruiting classes and ultimately a bust of top signing (Kyle Wright who was ranked ahead of Ernie Sims and Reggie Bush as the #1 High School Player in the Nation in 2002) made it necessary

to fire him. But my view is that he was a good man and an honest man who always did right by his players and the program which again is more than I can say for his predecessor, Butch Davis who would never be welcomed back at Miami because of the way he left the program.

"However, Miami's problems ran far deeper than Coker. Since Miami joined the ACC, they have raised their admission standards for athletes to match that of Duke and North Carolina. That has left several players like LeSean McCoy now at Pitt and many others who signed with Miami playing for other programs because they could not qualify. Secondly, the changing nature of College Football and the strong ACC has hurt Miami. Thirdly, Miami doesn't make plays anymore on special teams, and that is not Larry Coker' fault, but has accounted for a major swing for Miami. The Hurricanes used to have the best kick returners, the best punt block unit, the best kick coverage unit. This in my opinion was worth 10-14 points a game, that now has been lost. Lastly, I'd put a lot of blame on the QB position. Since Brock Berlin's graduation, Miami's quarterback play has been below average. Kyle Wright's failure to develop can be blamed partly on Coker, but it seems he took the fall for it. With decent QB play last season, Miami probably goes 10-2 instead of 6-6. That's how bad Wright has been and that is how bad he continues to be in most big games."