Countdown to the Canes: Does UM get a passing grade?

UM had only 56 yards passing on Saturday against Ga. Tech. A month ago Canes QBs were on target for 275 yds. against Texas A&M. What's changed?

"The bottom line is that Miami is a very poor passing team with two below average Division 1A (or Bowl subdivision if you so prefer) QB's. Actually in a different era,

Kirby Freeman may have been a decent College QB, since he is clearly an option oriented runner and thrower. Kyle Wright has underachieved his entire college career and is an open book for opposing defenses. He holds the ball for too long, locks onto receivers and isn't accurate in the deep passing game. Kyle Wright sadly will be remembered by the majority of Miami fans along the same lines as Chris Rix is remembered by many FSU fans. While it isn't fair for either one of them (Especially Rix who I would argue had several big games at FSU against good opposition) it has become easy for fans of both FSU and Miami who are in denial about the slippage of the both programs to blame the QB.

"Miami has some other obvious problems in the passing game. The Tight End, long a staple of Miami's attack is non existent this year as is the frequent passes we've seen in the past to the Fullback. Miami's Wide Recievers have some talent, most notably Sam Shields, but the like Wright have under-performed on the biggest stage. Lance Leggett 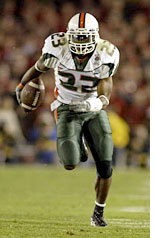 who will likely miss the FSU game due to injury has actually regressed substantially since his freshman season. The lack of playmakers at WR has led Miami to call an unprecedented number of running plays on 3rd down.

"Miami's running game hasn't been as good as it could be this season, but it has still been well above average. Miami is as deep at Running Back as anytime since the days of Willis McGahee, Frank Gore and Clinton Portis. Miami's Tailback trio of Javarris James and true freshmen Shawnberry McNeal and Graig Cooper is extremely dangerous. But Miami's lack of even a short passing game has often times not allowed the running game the opportunity to get on track, and as we have seen the last few weeks opposing coaches seem much more concerned about Miami's backs breaking a big run, then Miami hitting a long bomb TD pass, so they have tended to stack the line. Despite this Miami ran the ball very well against a good Georgia Tech run defense. Shawnberry McNeal had a 39 yards TD run, and Graig Cooper had a few decent runs as well.

"But even when Miami's running backs are able to get Miami into scoring position, the Canes cannot make the most of it because of a lack of a consistent passing attack. This happened against Georgia Tech where as you noted in the question, Miami threw for only 56 yards, and quite honestly having been at the game I was shocked it was that many. I suppose Miami is in reality, despite its "pro style" offense simply as one dimensional as Florida State's offense. Miami can run but not consistently throw, while FSU can throw but is hardly ever able to run the ball successfully in big games."