« Duke Preview with the Voice of the Blue Devils | Main | Tomahawks and Smelly Socks: Best and Worst of the Duke game »

Forget Trick or Treat. On Saturday night
many Seminole fans will be asking: 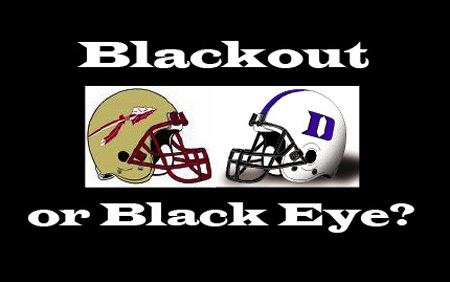 Wake Forest was to be a redemption game. Miami a statement game against a stumbling team. Now FSU is the one that's stumbling. Which makes Duke a circle the wagons game.

Duke is dangerous, at least on offense. These Devils nearly beat Wake, while hanging 36 on the Deacs. They were in the Miami game til the end. And their go-for-broke aerial attack will try to wear out Seminole DBs. Unlike most Duke teams of the past, if FSU plays sloppy and gives these guys reason to think they can win, they just might. In which case, Nole fans will keep wearing black the rest of the season. In mourning.

Will this be the game? The game when the team finally gets it right most of the time? Is penalized only half as much? Doesn't turn the ball over at crucial times? Remembers how to put opponents away-- instead of giving the game away? 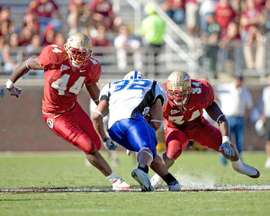 Best possible scenario. Eeking out a win will do little for the team's confidence or satisfy the fans. And it doesn't need to be a blowout. Just a win by a comfortable margin by a team that takes control from the start and never lets go. That more than anything would give the '07 Noles the momentum and determination to tackle three heavily favored opponents. And a fourth, Maryland, will be far from a creampuff.

Will it be Back To The Future for Drew? Weatherford played loose and was more

effective his redshirt freshmen year. By the middle of his sophomore season he was tight and tentative. This week Drew said something to the effect that watching a couple of games has made him less worried about making mistakes. Here's hoping we see the cooler, more confident Drew that beat B.C., Wake, Va. Tech, Penn State, UCLA and Miami -- twice.