Bowden doubts Thacker will be back for UM game:
"He didn't have a good week of practice"

"We lost our starting guard, Hudson. So we moved Boatman from tackle back into guard. Overmyer will be back this week. Just hope we don't get any more injuries there.Thacker, I thought he was gonna be back, but he hasn't practiced well. He might could play some, but he did not have a good week of practice. And we lost Marcus Ball, other than that we're okay."

(On the team's progress with the new staff)
"It's not a quick fix, but I do think we're on the right road. You know, you go out there and lose a ball game by seven, and you lose another one by three. You can win 'em as easy as you lose 'em. So I would think we might be one player away from being back where we were. But I do like our staff."

(Will things get better this year or will they take longer?) (Has the FSU - Miami series lost its luster?)
"The last 25 years that's been the best football game in the country. You've got seven national championships that have come out of that doggone game. And a lot of second and third places. So has it lost its luster? Not to the players, not to the coaches, not to your fans. As far the national aspect, who cares?"

(On key factors in this year's game) 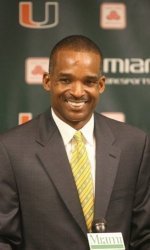 "One of the biggest things is going to be field position. Both teams are struggling with injuries on both sides of the ball. Also, we need to stop the run this week against Florida State and get them into a passing situation, which is one of our strengths. And our guys are focused on what we're trying to get done."

(On the intensity of the rivalry)
"It's always been a fun rivalry, not a hatred rivalry. You have fun playing against those guys because most of them you grew up with. I know those coaches on the staff, they're like friends. We always talk and communicate."

(On Kyle Wright's performance and progress)
"What Kyle is doing is he's not taking sacks like he did last year. Yes, he's thrown some picks which were unacceptable, but every interception wasn't his (fault). But he's accepted that role and I'm always going to back Kyle. He's learning and he's doing a great job for us. We would like for him to complete more passes and the deep ball. But we're with him and we're going to stay with Kyle."

(On Miami's three running back rotation) 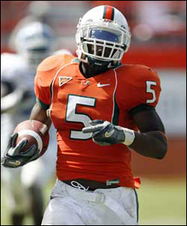 "Javarris (James) is more of a banging type guy, but he has a lot of speed and some nifty running, and he's great coming out of the backfield. (Graig) Cooper's an explosive guy we can do a lot of things with as far as shifting him -- line him up at receiver sometimes. And (Lee) Chambers is a young guy that has a lot of speed. We've got a true sophomore and two true freshmen starting at tailback at the University of Miami."